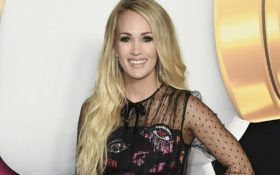 The 35-year-old country singer and former “American Idol” champion told “CBS Sunday Morning ” she got pregnant in early 2017 and it “didn’t work out.” She had a second miscarriage later that year and a third in 2018.

Underwood says she was afraid to be angry because she has an incredible husband, hockey player Mike Fisher, and an incredible son, 3-year-old Isaiah.

She says she got mad when she thought she might be suffering a fourth miscarriage and she “told God how I felt.” She went to the doctor and was told everything was fine. Underwood says God heard her.

The pregnant singer said she’ll go on tour this spring, hopefully with her new baby. She says “things are looking better.”