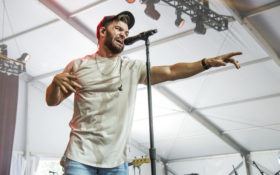 County music artist Dylan Scott has been around the music his whole life and that’s where he got the idea for his inaugural Bayou Stock music festival.

Growing up in Bastrop, Louisiana, Scott learned to sing and play guitar from his dad — a former guitar player for country legends Freddy Fender and Freddy Hart. He also attended, in nearby Rayville, Tim McGraw’s Swampstock which was formed to “give back to the community” and ended in about 2007.

“I always thought the idea of that was so cool, to come back and do something for the community,” Scott said in an interview with The Associated Press. “I wanted to do that too, to give back to kids whose family was not as fortunate as mine was. Our family always helped out around this time of year. We often adopted families at Christmas and this is an extension of that.”

Scott, with platinum-certified No. 1 single “My Girl” and gold-certified Top 5 single “Hooked” under his belt, will headline the event. The lineup also will include country music veteran Mark Chesnutt, Morgan Evans, Baskin, Louisiana-native Lainey Wilson, and Barrett Pepper, a rising star from the state.

“I am really pumped over this opportunity and look forward to recreating and maintaining the wonderful tradition that Tim started back in 1994,” the singer-songwriter said.

He said he and his family decided to go through the local schools to find the kids most in need of a Christmas pick-me-up. “They know who’s really struggling so we’ll get a list from them. Then my wife and I will get the wish lists and buy the presents ourselves. Santa’s going to arrive and then disperse the gifts to them. I can’t wait.”

Scott, 28, launched onto the country music scene in 2013 and his latest single, “Nothing To Do Town,” dropped on Friday.

He said it never gets old hearing his music on the radio or seeing how fans react when he performs.

“I grew up wanting to do this,” he said. “Now, I’m doing it. The sold-out shows, the music on the radio … it gives you a feeling of accomplishment and lets you know that all your hard work is paying off.”

Scott said he will be kicking off his “Nothing To Do Town” tour in mid-January in New York.

In the meantime, he said he’s still writing and preparing for his album to drop sometime next year.