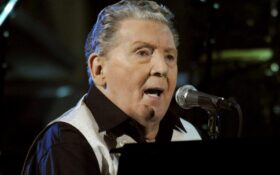 Lewis, 86, nicknamed “The Killer,” wore a red sequined jacket and white shoes at Tuesday’s announcement, where he was introduced by duo Brooks & Dunn.

“I was wondering if they were ever going to induct me,” Lewis said at the press conference. “But they’ve come around and I was really glad and grateful for it.”

He found his initial fame under the guidance of Sam Phillips at Sun Records in Memphis, where he played alongside Elvis Presley, Carl Perkins, and Johnny Cash in the now famous Million Dollar Quartet. His energy and ego were showcased on his early rock hits like “Great Balls of Fire” and “Whole Lotta Shakin’ Goin’ On.”

Over the years, he’s been vocal about being snubbed from the Country Music Hall of Fame, saying he couldn’t understand not being recognized for his country records and contribution to the genre.

His career was nearly derailed over the scandal of his marriage to his 13-year-old cousin, Myra, and he faced a backlash from fans during a tour in England in 1958, when crowds became combative.

Lewis spent several years blacklisted before mounting a return to the country charts in the late ’60s. He had top country singles like “What Made Milwaukee Famous (Has Made a Loser Out of Me),” ″She Even Woke Me Up to Say Goodbye,” and “To Make Love Sweeter for You.”

Whitley had a short career, spanning just four years and seven months on the Billboard charts before his death at the age of 34 in 1989. But he found commercial breakthrough with hits like “When You Say Nothing at All” and “I’m No Stranger to the Rain.”

His widow, fellow country singer Lorrie Morgan, described during the press conference on Tuesday how much it meant to her family and their two children to have him inducted.

“Keith never knew how good he was,” said Morgan. “He would absolutely blown away if he were here today.”

Galante took the helm at RCA Nashville at age 32, the youngest person to ever lead a major label’s Nashville division. He would go on to sign artists like Clint Black, Kenny Chesney, Lorrie Morgan and Keith Whitley, Vince Gill, The Judds, Martina McBride and more.