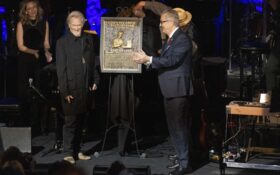 Two artists who started their careers outside of country music were inducted into the Country Music Hall of Fame as early rock pioneer Jerry Lee Lewis and bluegrass performer-turned-country star Keith Whitley joined the ranks.

Lewis, the 87-year-old artist nicknamed “The Killer,” was unable to attend the induction ceremony on Sunday in Nashville, Tennessee, due to guidance from his doctor. But his fellow country stars Hank Williams Jr. and Kris Kristofferson showed up in his stead to accept and honor the Rock & Roll Hall of Famer.

Lewis, from Ferriday, Louisiana, grew up on country music, but Sam Phillips at Sun Records in Memphis, Tennessee, turned him into a rockabilly star, with hits like “Whole Lotta Shakin’ Goin’ On” and “Great Balls of Fire.”

Williams, who also helped induct Lewis into the Rock & Hall of Fame in 1986, recalled Lewis spending time at his home when he was a kid and listening to Lewis’ rock songs on the radio. He said Lewis taught him that entertaining was about more than skill.

“Jerry Lee doesn’t ask for your attention, he demands it,” Williams said. “He doesn’t take a stage, he commands it.”

In Memphis, Lewis played alongside Elvis Presley, Carl Perkins and Johnny Cash in the now famous Million Dollar Quartet. Lewis’ career was nearly derailed over the scandal arising from his marriage to his 13-year-old cousin, Myra, and he faced a backlash from fans during a tour in England in 1958, when crowds became combative.

Lewis was abandoned by concert promoters for several years before mounting a return to the country charts in the late 1960s. He had No. 1 hits on the Billboard Country Chart with “There Must Be More to Love Than This,” “Would You Take Another Chance on Me” and “Chantilly Lace.” His other top country singles included “What Made Milwaukee Famous (Has Made a Loser Out of Me),” ″She Even Woke Me Up to Say Goodbye” and “To Make Love Sweeter for You.”

Isaak delivered a rollicking version of “Great Balls of Fire” during the ceremony and 85-year-old actor and singer Kristofferson made a rare public appearance to help unveil Lewis’ plaque, which will be enshrined in the Hall of Fame rotunda.

Morgan was moved to tears during her speech, noting that her late husband would feel so undeserving of the honor. Whitley’s first work as a musician was in bluegrass, when he and Ricky Skaggs started playing as teenagers in Ralph Stanley’s band, the Clinch Mountain Boys.

“My whole family, we’ve all missed him together and all the fans who loved Keith and visited his gravesite all the time,” she said.

That bluegrass background made Whitley stand out as a country singer in the 1980s, where he brought tender emotion and incredible vocal range to hits including “When You Say Nothing at All” and “I’m No Stranger to the Rain.”

But his career was ended too short, spanning just four years and seven months on the Billboard charts before his 1989 death from alcohol poisoning at age 34. But the singer from Sandy Hook, Kentucky, continued to influence numerous country singers who came up alongside him, including Brooks, who praised his pure country singing and authenticity.

“Truth, honesty. The guy could outsing 99 percent of us,” Brooks said.

Galante was the head of RCA Nashville in his 30s and both Morgan and Whitley were among the hit artists that he brought to success, including Clint Black, Kenny Chesney, Miranda Lambert, Vince Gill, The Judds, Martina McBride and more. He helped the band Alabama achieve crossover success with multi-platinum hits.

“I was a label head, but I was a huge fan of their music,” Galante said. “And it’s all about the music at the end of the day.”