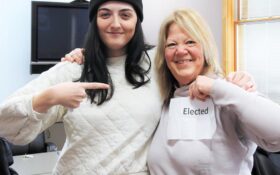 The election to fill a city council seat in a Michigan town was settled by drawing two pieces of paper from a bowl, days after a 616-616 tie.

Brittany VanderWall’s paper said “not elected.” There were hugs by the pair Monday — and no hard feelings, The Alpena News reported.

“I told people, either way, Rogers City wins,” VanderWall said before the drawing.

Adair said the Election Day tie meant the northern Michigan town, population 2,800, should be satisfied with both candidates.

“The people have spoken, and they said, ‘Eh, either one,’” Adair said.

VanderWall is already looking ahead to the next election.

“Congrats,” she told Adair. “Do good work. I’ll see you in two years.”