Could the newest cancer treatment be polio!? - The Horn News 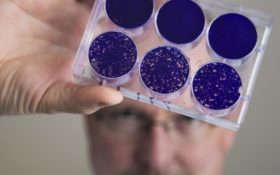 One of the world’s most dreaded viruses has been turned into a treatment to fight deadly brain tumors. Survival was better than expected for patients in a small study who were given genetically modified poliovirus, which helped their bodies attack the cancer, doctors report.

It was the first human test of this and it didn’t help most patients or improve median survival. But many who did respond seemed to have long-lasting benefit: About 21 percent were alive at three years versus 4 percent in a comparison group of previous brain tumor patients.

Similar survival trends have been seen with some other therapies that enlist the immune system against different types of cancer. None are sold yet for brain tumors.

“This is really a first step,” and doctors were excited to see any survival benefit in a study testing safety, said one researcher, Duke University’s Dr. Annick Desjardins.

Preliminary results were to be discussed Tuesday at a conference in Norway and published online by the New England Journal of Medicine.

MAKING AN ENEMY AN ALLY

Brain tumors called glioblastomas often recur after initial treatment and survival is usually less than a year. Immunotherapy drugs like Keytruda help fight some cancers that spread to the brain but have not worked well for ones that start there.

Polio ravaged generations until a vaccine came out in the 1950s. The virus invades the nervous system and can cause paralysis. Doctors at Duke wanted to take advantage of the strong immune system response it spurs to try to fight cancer. With the help of the National Cancer Institute, they genetically modified poliovirus so it would not harm nerves but still infect tumor cells.

The one-time treatment is dripped directly into the brain through a thin tube. Inside the tumor, the immune system recognizes the virus as foreign and mounts an attack.

When doctors explained the idea to Michael Niewinski, it seemed a feat “like putting a man on the moon,” he said. The 33-year-old from Boca Raton, Florida, was treated last August, and said a recent scan seemed to show some tumor shrinkage.

The study tested the modified poliovirus on 61 patients whose tumors had recurred after initial treatments. Median survival was about a year, roughly the same as for a small group of similar patients given other brain tumor treatments at Duke. After two years, the poliovirus group started faring better.

Stephanie Hopper, 27, of Greenville, South Carolina, was the first patient treated in the study in May 2012 and it allowed her to finish college and become a nurse. Scans as recent as early June show no signs that the tumor is growing back, she said.

“I believe wholeheartedly that it was the cure for me,” she said. Her only lasting symptom has been seizures, which medicines help control. “Most people wouldn’t guess that I had brain cancer.”

The treatment causes a lot of brain inflammation, and two thirds of patients had side effects. The most common ones were headaches, muscle weakness, seizure, trouble swallowing and altered thinking skills. Doctors stressed that these were due to the immune response in the brain and that no one got polio as a result of treatment.

One patient had serious brain bleeding right after the procedure. Two patients died relatively soon after treatment — one from worsening of the tumor and the other from complications of a drug given to manage a side effect. The planned doses had to be reduced because there were too many seizures and other problems at the higher doses initially chosen.

One independent expert, Dr. Howard Fine, brain tumor chief at New York-Presbyterian and Weill Cornell Medicine, said it was disappointing to see no improvement on median survival, but encouraging to see “extraordinary responders, a small group of patients who have done markedly better than one would expect.”

The numbers in the study are small, but it’s unusual to see many alive after several years, and suggests the approach merits more and bigger studies, he said.

The National Cancer Institute manufactured the modified virus. Federal grants and several charities funded the work. Some study leaders have formed a company that licenses patents on the treatment from Duke.

Duke has started a second study in adults, combining the poliovirus with chemotherapy, to try to improve response rates. A study in children with brain tumors also is underway, and studies for breast cancer and the skin cancer melanoma also are planned.