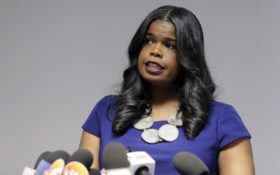 A prosecutor who came under harsh criticism when her office suddenly dropped charges against actor Jussie Smollett and is now the subject of a court-ordered investigation announced Tuesday she is running for reelection.

In her news release saying she’s seeking the position again, Cook County State’s Attorney Kim Foxx addressed the Smollett case and the furor over the handling of it. The actor was accused of staging a racist and homophobic attack against himself earlier this year in Chicago while in the city filming the television series “Empire.”

“Truth is, I didn’t handle it well. I own that. I’m making changes in my office to make sure we do better,” Foxx said, without elaborating.

She is the first black woman to lead the office that prosecutes cases in the county, which includes Chicago. She was elected in 2016 after promising to make criminal justice reform a priority.

“Four years ago, I ran for State’s Attorney to change criminal justice in Cook County,” said Foxx, who grew up in Chicago’s crime-ridden Cabrini Green housing project. “I’m running again because we’re only getting started.”

Since being top prosecutor, she has verbally tussled with Chicago’s police union. In July, Chicago Fraternal Order of Police president Kevin Graham sent her a letter demanding that she turn over to a special prosecutor any cases in which officers are accused of misconduct or are victims of crimes because of a “deep mistrust” between police and Foxx’s office.

Foxx, in her release Tuesday, accused the union of being opposed to change. She also criticized President Donald Trump, who has repeatedly singled out Chicago for its gun violence, and the National Rifle Association.

“Every day, my office is under attack: from a President who uses our city as a punching bag, the NRA hell bent on letting guns flood our streets, and the FOP clinging to the old ways,” she said, adding that they will “do anything to undercut progress.”

She said her office has been successful in prosecuting more violent crimes, including murder convictions in the high-profile Chicago shootings of 9-year-old Tyshawn Lee in 2015 and 15-year-old Hadiya Pendleton in 2013.

It remains to be seen how much they will focus on the way Foxx and her office handled the Smollett investigation, but the case will undoubtedly loom over the campaign.

Smollett, who is black and gay, reported that two men shouted racist and anti-gay slurs at him and physically attacked him in January in downtown Chicago. Foxx was approached by former first lady Michelle Obama’s onetime chief of staff on behalf of Smollett’s family after the attack. Foxx later recused herself from the actor’s case because she said she wanted to avoid “even the perception of a conflict” of interest after communicating with a relative of Smollett.

She handed the case to a top aide. And just weeks after Smollett was indicted on 16 counts of disorderly conduct for allegedly staging the attack, Foxx’s office announced it was dropping the case.

Critics, including then-Mayor Rahm Emanuel and Police Superintendent Eddie Johnson blasted the decision, and months later a judge appointed a special prosecutor to look into why the office abruptly dismissed the case. Smollett has maintained his innocence.

Ironically, it was another criminal investigation by Foxx’s predecessor that is widely believed to have been a critical factor in Foxx’s election in 2016. At the time Foxx was running, State’s Attorney Anita Alvarez was under fire for her handling of the investigation into the fatal shooting of black teenager Laquan McDonald by white Chicago police officer Jason Van Dyke in 2014. Alvarez was harshly criticized because her office did not charge Van Dyke until a dashcam video of the shooting was made public more than a year later.

Foxx defeated Alvarez in the Democratic primary in March 2016 and went on to win the general election.