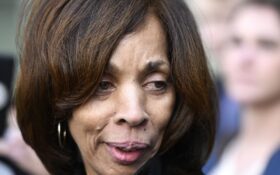 Baltimore’s disgraced former mayor Catherine Pugh, who was embroiled in a scandal involving her “Healthy Holly” children’s books, is expected to plead guilty to perjury Friday, the state prosecutor said.

Pugh already has been sentenced to three years in federal prison over the self-dealing scandal, which involved children’s books touting exercise and nutrition that netted the now-70-year-old Democrat hundreds of thousands of dollars. She had pleaded guilty to federal conspiracy and tax evasion charges last year and is scheduled to report to federal prison later this month.

The state perjury charge relates to Pugh’s failure to disclose her business interest in Healthy Holly, LLC on her financial disclosure forms when she was a Maryland state senator. Pugh earned at least $345,000 in income in 2016 through sales of her books, but failed to mention her ownership in the forms filed with the Maryland State Ethics Commission and signed under the penalties of perjury, according to the state prosecutor’s office.

She faces up to 10 years in prison on the misdemeanor charge.

Pugh served in the Maryland Senate from 2007 to 2016, when she was elected Baltimore’s mayor. She resigned as mayor under pressure last year as authorities investigated bulk sales of her paperbacks.

In the federal case, Pugh admitted to defrauding purchasers of her books to pay for straw donations to her political campaign for mayor and to fund the purchase and renovation of a house in Baltimore.

She also admitted to selling her books to the University of Maryland Medical System, where she had served as a board member.

The medical system paid Pugh a total of $500,000 for 100,000 copies that were meant to be distributed to schoolchildren, but about 60,000 of those books were sent to a city warehouse and a Pugh office where thousands were removed to give to other customers. Prosecutors say Pugh never delivered the other 40,000 books the health system purchased for city schools.

While serving in the state Senate, Pugh sat on a committee that funded the medical system. She also sat on the hospital network’s board from 2001 until the scandal erupted in March 2019. Pugh returned the last $100,000 payment.

Before her federal sentencing in February, Pugh accepted “full responsibility” for her actions and apologized through tears during the roughly 10 minutes she spoke in federal court in Baltimore. She said she did not want to bring “any more shame” to Maryland’s largest city, which for years has struggled with grinding poverty, political mismanagement, record crime rates and police abuses that led to massive riots.