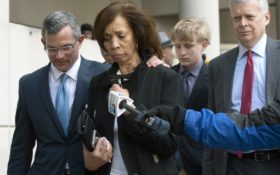 Former Baltimore Mayor Catherine Pugh is refunding more than $800,000 to campaign donors, months after she was convicted in a case involving the fraudulent sales her self-published children’s books to promote her political career.

Donors requested their money back following the Democratic lawmaker’s resignation in May 2019, but as of early 2020, more than $915,000 had remained in her campaign’s bank account, the newspaper said.

Rosenthal said that after paying outstanding bills, the campaign committee would be dissolved this year.

The Baltimore Sun discovered last spring that Pugh sold her “Healthy Holly” children’s books to nonprofit organizations and foundations, including the University of Maryland Medical System, to promote her political career and fund her run for mayor. She pleaded guilty to federal conspiracy and tax evasion charges in November 2019 and was sentenced in February to serve three years in prison.