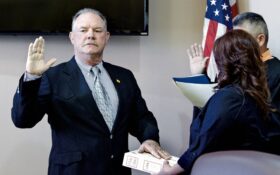 Police have seized cellphones of a New Mexico sheriff accused of showing up drunk to a SWAT standoff.

The search warrants came as part of an investigation into a misdemeanor charge filed against Lujan by Española police for resisting, evading or obstructing an officer.

A criminal complaint filed in March said Lujan, in plainclothes, attempted to take over the scene involving a barricaded subject in Española.

The complaint, written by interim Española police Chief Roger Jimenez, states Lujan refused, despite commands from officers, to leave the scene. The complaint also says he smelled like alcohol and appeared to have trouble keeping his balance.

Lujan told Jimenez he was communicating with Phillip Chacon, the man who was the target of the SWAT standoff and had barricaded himself inside his home while officers tried to serve him with an arrest warrant, according to the criminal complaint.

Ninth Judicial District Attorney Andrea Reeb said Thursday there was “some difficulty” obtaining Lujan’s cellphones and that she made a call to Lujan’s attorney, Nathaniel Thompkins, to say Lujan needed to turn over the phones.

The search warrant for Lujan also included information about another search warrant served earlier this week by Española police for the cellphone of an Española city councilor.

John Ramon Vigil was charged last week with several felonies, including conspiracy to commit bribery of a public officer and unlawful interest in a public contract, after officers discovered text messages, emails and Facebook messages he exchanged with Chacon.

A detective found the messages on Chacon’s phone while investigating aggravated battery charges against the man.

Officers “had some difficulty getting Mr. Vigil to exit his residence and comply with the search warrant,” according to the document.

Lujan, along with Undersheriff Martin Trujillo, then arrived at Vigil’s home, according to the search warrant, and detectives at the scene said they thought Lujan was obstructing their investigation.