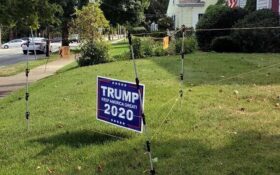 Authorities were trying Friday to determine who taped razor blades to the bottom of a Trump 2020 campaign sign, slicing the fingers of a worker tasked with removing signs that were too close to a roadway in southeast Michigan.

A second sign also was found to have razor blades taped “all along the bottom edge,” according to the sheriff’s office. Both signs were along a road in front of a home in Commerce Township, which is about 30 miles (48 kilometers) northwest of Detroit.

“Deputies spoke with the homeowner (who) indicated their signs had previously been stolen, and when they returned from out of town the signs were back in their yard,” the sheriff’s office said in a release.