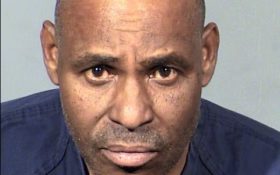 Las Vegas police found a woman’s body in a suitcase and arrested a man on suspicion of murder and other charges after another woman told a court officer she’d been sexually assaulted and another woman had been killed, authorities said.

The Clark County coroner’s office said the body of 22-year-old Morgan Amaya was found Wednesday inside the suitcase and that she died after being shot in the head.

Gary Walker, 55, remained jailed Friday on suspicion of murder, eight counts of sexual assault, first-degree kidnapping with a deadly weapon and assault with a deadly weapon. It wasn’t immediately known whether he had an attorney who could comment on the allegations.

The Las Vegas Metropolitan Police Department said in a statement that a woman told a marshal at the Regional Justice Center in Las Vegas that she needed help. Police didn’t say why the woman was at the courthouse.

Walker was with the woman at the courthouse and he was detained, police said.

Homicide detectives found a woman’s body in a suitcase at the apartment, the statement said.

Justice of the Peace Joe Bonaventure said Walker had multiple felony and misdemeanor convictions in other states and he ordered him held without bail.

Amaya’s sister-in-law, Nicole Marie, told KSNV-TV that Amaya had been battling drug addiction and trying to get clean so she could get custody of her 1-year-old daughter.

Marie said she and her fiance had met Walker and that they thought he was a friend who was helping Amaya by giving her a place to stay since she and her husband separated.