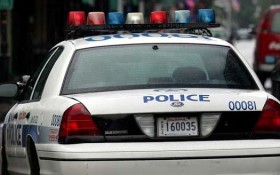 A man opened fire on three law enforcement officers trying to serve an eviction notice Wednesday near this Colorado mountain community, killing one and wounding the others, authorities said.

The officers fired back, killing the gunman, officials said. One of the wounded officers was undergoing surgery for life-threatening injuries, and the other suffered less serious injuries, Colorado Bureau of Investigation spokeswoman Susan Medina said.

The man opened fire with a rifle after the deputies from the Park County Sheriff’s Office went to the hillside home north of the town of Bailey, about 45 miles southwest of Denver. The wooden two-story home stood in a snowy forested area.

Neither the man nor the deputies were identified. The officer who was killed served 10 years on the force, Medina said.

A bomb squad from neighboring Jefferson County and the federal Bureau of Alcohol, Tobacco, Firearms and Explosives had been called to assist investigators, Medina confirmed.

Park County is a smaller, largely rural county and sometimes gets assistance from larger outside agencies.

The picturesque town is where a gunman took several girls hostage in a high school classroom a decade ago, killing one of them before himself. Duane Morrison, a 53-year-old drifter, held the girls for nearly four hours and sexually assaulted them in September 2006.

He fatally shot 16-year-old Emily Keyes and then killed himself as SWAT team members stormed the classroom at Platte Canyon High School.