Cops chase runaway cow for an hour - The Horn News 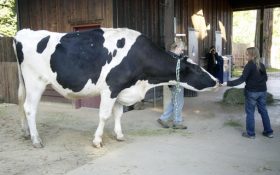 A cow bound for a slaughterhouse who led authorities on an hour-long chase along Interstate 80 in New Jersey before being captured is recuperating at an animal sanctuary.

The director of the Skylands Animal Sanctuary and Rescue in northwestern New Jersey tells the New Jersey Herald the cow suffered cuts and scrapes from falling from the second floor of the trailer early Thursday near Paterson.

Mike Stura tells the newspaper the cow has received shots and been examined by a veterinarian. She will remain at the sanctuary if she is able to recover fully.

The cow has been named Brianna in honor of the police officer named Brian who alerted the sanctuary to the animal’s escape.