Cops bust the most BIZARRE smuggling ring EVER - The Horn News 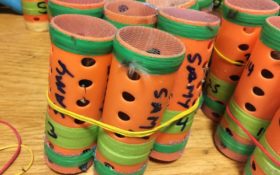 Authorities say a passenger arriving from Guyana on Saturday had the songbirds in a duffel bag.

The New York Times reports officials believe the birds were brought to the U.S. to participate in singing contests. Customs officials say people bet on how many times the finches chirp, and a winning male finch can sell for up to $10,000.

The birds were turned over to veterinarians to the U.S. Agriculture Department, and the passenger was sent back to Guyana.

U.S. Customs and Border Protection says bird smuggling could threaten agriculture through the possible spread of diseases such as bird flu.

Customs officers have seized about 184 finches this year.