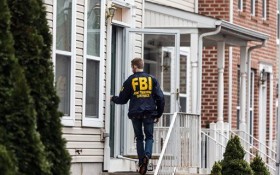 A veteran Pittsburgh police officer stands accused of lying to the FBI during a bank robbery investigation this year.

A Pittsburgh police spokesman says Cain has reached a plea deal with prosecutors and has been placed on unpaid suspension. But further details were not disclosed, and a telephone number for Cain could not be located Friday.

Cain has served on the force since 1994.

They say he denied knowing who the robber was when he did know because the robber had confessed to him.