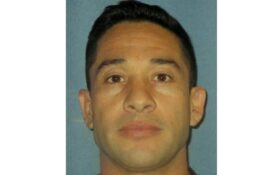 Authorities say they are investigating how a convicted bombmaker was able to easily escape from a Nevada prison without anyone noticing for four days, before a tip led to his capture at a transit center in Las Vegas Wednesday night as he prepared to board a bus out of town.

State corrections officials didn’t realize until Tuesday that Porfirio Duarte-Herrera had escaped Sept. 23 from the medium-security prison where he was serving a life sentence for a deadly 2007 explosion outside a Las Vegas Strip resort.

Las Vegas police said they were informed Wednesday night that a person matching the description of Duarte-Herrera was in the area. Officers took the man into custody, confirmed he was Duarte-Herrera, 42, and arrested him, the department said.

“The policies and procedure and all the failures that occurred on Friday and up to Tuesday need to be addressed,” said Clark County Sheriff Joe Lombardo at a press conference Thursday.

Lombardo, a Republican who is trying to unseat Democratic Gov. Steve Sisolak in November’s election, said he was imploring Sisolak to make good on his pledge to conduct a thorough investigation to make sure it doesn’t happen again.

“Infrastructure issues and prison system staffing issues, the ability for this individual to do it — from what I’ve been told — as simply as he did it is a grave concern to me and the entire law enforcement community and the community as a whole,” he said.

Lombardo, the U.S. Marshall for Nevada and an FBI special agent said it was the cooperation of numerous law enforcement agencies, extensive media coverage and ultimately a tip from the public that led to his capture.

“In this case, the individual had a four-day head start,” Lombardo said. “Fortunately, and unfortunately, he remained in the area and we were able to apprehend him with the assistance of the public.”

Lombardo told reporters Thursday any information about the escape itself will have to come from the Department of Corrections, “and hopefully they will provide you information shortly with the circumstances of the escape.” When asked by a reporter whether DOC was invited to participate in the joint law enforcement news conference, Lombardo said yes.

Sisolak ordered an investigation into the escape after he said late Tuesday his office learned Duarte-Herrera had been missing since early in the weekend.

The governor’s office said in a statement emailed to The Associated Press Thursday he is working directly with Department of Corrections Director Charles Daniels “to ensure swift action is taken to address the conduct which led to the escape.”

“Failure to follow protocol or procedures cannot be tolerated where public safety is at stake. Beyond this incident, addressing larger scale deficiencies in staffing remains a priority to the governor,” said Meghin Delaney, his communication’s director.

“Correctional institutions across the country are facing staffing shortages and NDOC is looking at innovative ways to increase recruitment at all facilities within this state,” she wrote.

Officials didn’t realize until Tuesday morning that he was missing during a head count at Southern Desert Correctional Center near Las Vegas.

Neither Lombardo nor Sisolak would comment on a KLAS-TV report citing unnamed sources that Duarte-Herrera used acid to help erode the area securing his cell window so he could climb out. That report also said he had created a cardboard dummy to leave in his cell, and sewed a coat in a prison class, which he took with him after his escape. Officials were investigating whether he had an accomplice.

Lombardo said he spoke with the inspector general’s office at the Department of Corrections, “and I have confidence they are going to get to the bottom of this and employ resources to prevent it from happening in the future.”

Duarte-Herrera, from Nicaragua, was convicted in 2010 of killing a hot dog stand vendor using a motion-activated bomb in a coffee cup atop a car parked at the Luxor hotel-casino.

Records show his co-defendant, Omar Rueda-Denvers, remains in custody. The 47-year-old from Guatemala is serving a life sentence at a different Nevada prison for murder, attempted murder, explosives and other charges.

A Clark County District Court jury spared both men from the death penalty in the slaying of Willebaldo Dorantes Antonio, whom prosecutors identified as the boyfriend of Rueda-Denvers’ ex-girlfriend.

Prosecutors said jealousy was the motive for the attack on the top deck of a two-story parking structure. The blast initially raised fears of a terrorist attack on the Strip.

Gary Schofield, U.S. Marshal for Nevada, said authorities were continuing to investigate where Duarte-Herrera was and what he did between the escape and when someone dropped him off near the transit center.

“That was the first time any authorities within Nevada were aware of what was occurring out at the prison,” he said.