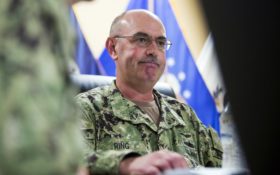 Military officials say the commander of the task force that runs the prison at the U.S. Naval Station at Guantanamo Bay, Cuba, has been fired for a “loss of confidence in his ability to command.”

The commander of Southern Command, Navy Adm. Craig Faller, relieved Ring. The statement says the change in leadership “will not interrupt the safe, humane, legal care and custody provided to the detainee population at GTMO.”