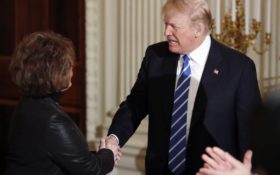 The GOP is the party of fiscal responsibility no more.

That’s according to some conservatives who are grappling with a Republican-backed spending binge that threatens to generate trillion-dollar deficits for years to come while staining a cherished pillar of the modern-day Republican Party.

While President Donald Trump and his allies hope economic growth may ease future deficits, few fiscal conservatives cheered Monday’s release of the president’s $4 trillion-plus budget, which would create $7.2 trillion in red ink over the next decade if adopted by Congress. That follows congressional passage of last week’s $400 billion spending pact, along with massive tax cuts, which some analysts predict will push deficits to levels not in generations.

American Conservative Union chairman Matt Schlapp warned the Republican-controlled Congress not to underestimate the impact of responsible spending for voters.

“If the Republicans in Congress don’t realize that spending control is one of the most important issues that our winning coalition cares about, if they are cavalier about spending decisions, I think we do risk our ability to go to the voters and say it matters to have us in the majority,” he said.

The conservative backlash against government spending comes at a delicate moment for Trump’s Republican Party.

Have you taken this in the past 20 years? [sponsored]

Barely a year into his first term, the populist president has shown inconsistent commitment at best to the three planks that have defined his party since the Reagan era: fiscal responsibility, traditional family values and a strong national defense. With the GOP’s fiscal responsibility now in question, the party’s commitment to family values also continues to suffer as Trump and some high-profile allies struggle under the weight of repeated allegations of sexual misconduct and abuse.

Fiscal discipline has long helped unify an otherwise divided GOP, but that no longer appears to be the case as Republicans brace for a difficult midterm election season.

Americans for Prosperity, the political arm of the network backed by the conservative billionaires Charles and David Koch, described the recent spending from Trump and Congress “a far cry from the so-called fiscal responsibility Americans heard on the campaign trail.”

Voters may forgive Trump’s spending habits because he’s new to Washington, but they will not be as kind to Republicans on the midterm ballots, said David McIntosh, president of the conservative Club for Growth, who lashed out at last week’s Republican-backed spending plan as “of the swamp, by the swamp and for the swamp.”

“They’re not going to give a pass to the Republicans in Congress unless they start doing something to restrain the growth of government,” he said.

“You can’t let (Senate Majority Leader) Mitch McConnell and the spenders in the Senate set the agenda this year,” McIntosh continued. “Because politically, if they set the agenda, then you’re going to see big losses in the House and the Senate.”

The president’s spending outline for the first time acknowledges that the Republican tax overhaul passed last year would add billions to the deficit and not “pay for itself” as Trump and his Republican allies asserted. If enacted as proposed — though no presidential budget ever is — the plan would establish an era of $1 trillion-plus yearly deficits.

Trump’s spending plan is like “throwing gasoline on a house that’s already on fire,” said David Biddulph, co-founder of a national organization fighting for a balanced budget amendment. “I think it’s awful what we’re doing to our grandkids.”

A self-described fiscal conservative, he blamed the political system more than the Republican Party for the latest spending binge. Yet he encouraged Trump to do more to cut spending on Medicare and Social Security, which he left largely untouched in his budget.

If not, Biddulph said, “I don’t know that we’ll ever dig our way out of this hole.”