Conservative voter? Be aware of this... (China's doing?) - The Horn News 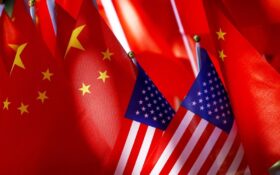 The latest case involves a real David and Goliath case. A handful of conservative accounts that take on the Chinese Communist Party have been shut down on Twitter.

And with absolutely no explanation.

Twitter suspended the accounts of five books that expose the People’s Republic of China’s human rights abuses and oppression — and, for good measure, the platform banned the publisher, as well.

Optimum Publishing International had the gall to publish books that China didn’t like, and now it can’t communicate with Twitter’s users.

The books were published to bring the truth down on Beijing. However, Optimum President Dean Baxendale said, “I have no voice now for that, and obviously I had a significant following from military-intelligence analysts to academics to publishers, and media as well.”

No one has said that anything published by these half-dozen accounts has crossed any line, used any offensive or abusive language, or spread the dreaded “misinformation.”

Why these got suspended, no one knows—and Twitter isn’t doing anything to help you understand.

When National Review Online asked about it, Twitter did not respond to its request.

It’s bad enough that Twitter is throttling down conservative accounts and experimenting with new forms of censorship it hasn’t fully disclosed yet. But it’s even worse when this left-wing online echo chamber teams up with one of the most powerful authoritarian governments in the world to crush six small, conservative Twitter accounts for telling the truth.

To make matters worse, it’s not even the first time Twitter decided to do China’s bidding. Not by a long shot.

“In July, Twitter took similar action against Anne-Marie Brady, an academic from New Zealand whose work on China’s United Front political-influence network is regarded as the best in the field,” wrote Jimmy Quinn at National Review Online.

Last September, Twitter suspended the account of a Chinese virologist who said that the COVID-19 virus had in China’s Wuhan Institute of Virology: Dr. Li-Meng Yan, a former researcher at the Hong Kong School of Public Health. Back then, this was a conspiracy theory; now, even the nation’s most elitist media outlets admit it’s a real possibility.

It would be bad enough to shoot the messenger, but then Twitter shot other people who helped the message spread.

Last February, Twitter permanently suspended the conservative financial website Zero Hedge for publishing information that made the exact same claim—that the coronavirus pandemic originated in a Chinese laboratory. Zero Hedge allegedly published a pen name and real contact information (including the phone number and email address) of the scientist.

Zero Hedge said that it got banned for breaking the social media platform’s “rules against abuse and harassment.”

“For lack of a more precise starting point, the election of Donald Trump did away with our near-universal agreement over the right to speak, driven by a false belief that too much free speech helped Trump get elected. Large numbers of Americans began not just to tolerate, but to demand censorship,” Peter Van Buren wrote in The American Conservative.

The tacky Twitter takedown of conservatives and critics of China, and its politically correct ideology in general, reminded him of the censorship brought to Iran by the Islamic Revolution led by Ayatollah Khomeini in 1979.

Unfortunately, it is the America we see. We’d better open our eyes before this goes any further.