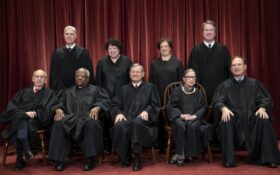 Another patriot bites the dust.

Public outcry is pouring in amid reports that a prominent documentary about Justice Clarence Thomas has been canceled.

The SCOTUS justice is just one of many to face censorship as corporations continue to cave to liberal demands in canceling conservative voices and platforms alike.

The film’s producer and director, Michael Pack, is claiming in an interview with the Wall Street Journal that his film — “Created Equal: Clarence Thomas in His Own Words” — simply vanished without explanation.

“They have the right to pull anything from their site,” Pack admitted, “and they don’t have to give an explanation. So it’s not a contract violation. But many people have complained, and they haven’t put it back up.”

Fox News reports that a search for the documentary on the Amazon Prime video service came up with alternative results, but not the film itself.

And as for Amazon’s retail site, Fox has also reported that the film shows it is “temporarily out of stock.”

The film, which aired on PBS in 2020, digs into the details of the SCOTUS confirmation hearings in which Anita Hill infamously accused Thomas of sexual harassment, and also uncovers rarely seen sides of the historic judge.

“Clarence Thomas, to my mind, is the most important African-American leader in America today,” Pack was quoted saying.

“I don’t think Amazon should get away with doing these things without suffering at least some PR consequences.”

And if it wasn’t already bad enough that major U.S. corporations are shutting out conservatives, perhaps the biggest kicker of all is that the film had reportedly been removed during black history month.

News of Thomas’ canceling comes on the heels of a huge public outcry around the Dr. Seuss book series, which removed books for featuring what some had called racially insensitive images.

As with Dr. Seuss, Thomas’ supporters have been vocal on his behalf.

It’s hard to understand why the life story of America’s only sitting Black Supreme Court justice—a story that has been so inspirational to so many—has been removed from Amazon Prime during Black History Month. What’s going on, Amazon?https://t.co/6taxEJ3BCe