Conservative radio star to take on Trump 2024!? - The Horn News 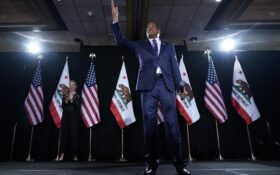 Former President Donald Trump’s campaign to retake the Republican presidential nomination in 2024 has gotten off to a slow start.

Former political allies and backers have declined to endorse Trump and have shied away from his few events.

Former California gubernatorial candidate and longtime radio talk host Larry Elder confirmed to FOX 11 on Friday that he was eyeing a run at the White House.

“I’m thinking about running for president, yes,” Elder reportedly told The Issue Is: With Elex Michaelson.

“I’m a registered Republican,” he said.

After losing a recall election challenge against Gov. Gavin Newsom, D-Calif., in 2021, Elder said he took time off to think about his future when he said he was approached by a number of backers that urged him to run for president.

“A Republican has not won statewide in California since 2006,” Elder told the Washington Examiner on Monday. “Frankly, the electoral battlefield on a national level is far more inviting.”

He said issues like energy independence, economics, and the U.S.-Mexico border crisis.

“I want to tackle this nonsensical notion that America remains systemically racist,” Elder said. “We need to address the 800-pound elephant in the room, namely the large number of children who enter the world without a father in the home married to the mother.”

Elder said he believes Trump is vulnerable because the 45th president has “smaller and shrinking base.”

Or should Republicans get out of the way and let the former president have the 2024 nomination?