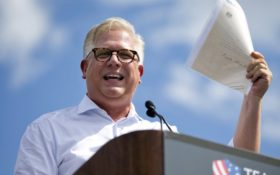 Conservative radio star and former Fox News host Glenn Beck announced that he has been diagnosed with COVID-19… a second time.

Beck appeared on Mark Levin’s popular radio talk show this week where he told Levin he has been battling an infection over the past week.

“I am great, Mark. I am great… except having COVID and seeing the destruction of our country,” he told Levin.

“Do you have COVID right now?” Levin asked.

Beck said the disease had spread to his lungs and was “a little disturbing” — but it wasn’t as bad as his first fight against coronavirus, which happened last December.

Beck has previously disclosed that he wasn’t vaccinated and trusted his natural immunity after he said a serious infection in December 2020.

The CDC says the vaccine can help even those who have had a prior infection.

Beck said the disease was “starting to go into my lungs today and a little disturbing.”

But he was optimistic and said his infection wasn’t as bad as the first time he was diagnosed.

“I’m on all the medications and treatments and everything else,” Beck said. “So, it’s all good.”

On social media, Beck called it “just the worst ‘cold’ I have ever had” and said he was on various treatments to fight the infection.

“I have had it for about a week,” Beck told Levin. “I’m not going downhill. I mean, I think I’m feeling better. It’s just getting into my lungs… you will want to avoid that.”

“Mark, I am not concerned about it,” he said. “I’m really not, I am just so done with this whole COVID thing.”

Beck said he was taking the illness seriously because he knows it is real after his first infection — and his underlying issues were a concern, but he still believed he’d be back healthy soon.

“I am a fatty-fat-fatso, so that is probably not the best thing, and I got some other issues,” he said.