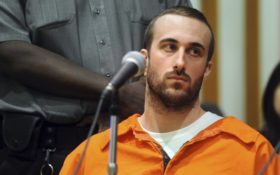 A Connecticut man has been sentenced to 55 years in prison in the fatal shootings of his mother and father.

Kyle Navin told a judge in Superior Court on Friday that he had no statement to make before his sentencing because he didn’t want to be a “show pony for the media.”

Navin had pleaded guilty to two counts of murder just before his trial was set to begin in the slayings of Jeffrey and Jeannette Navin, of Easton, on Aug. 4, 2015.

The couple, operators of a garbage company, was found dead in a wooded area of Weston. Court documents say they were upset about their son’s behavior and drug use, and planned to sell the company and cut him out of their wills.