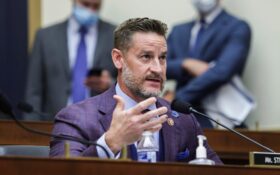 Rep. Greg Steube, R-Fla., was reportedly rushed to the hospital Wednesday after sustaining a serious injury on his property.

“Congressman Steube was involved in an accident on his property late this afternoon and has sustained several injuries,” the representative’s office said in a statement. “We will provide additional updates when possible. Please pray for the Congressman and his family.”

Local media have been covering this developing story. Insiders told Florida Politics that Steube had fallen off his roof.

On Thursday, Steube’s office confirmed the reports and thanked an onlooker for calling 911.

Steube spent the night in the intensive care unit where doctors are still assessing several serious injuries suffered in Wednesday 25-foot (7.6-meters) fall. His injuries are not considered life-threatening, a statement posted on Twitter said.

“He is making progress and in good spirits,” the statement said.

The Congressman spent the night in the ICU where several serious injuries are still under assessment but not life threatening at this time. He is making progress and in good spirits.

Additionally, our team expresses thanks to members of the media who waited patiently to accurately report the incident before releasing falsities to the public. Accurate updates about Rep. Steube’s current condition will be found on his official Twitter account.

Local sources tell @Fla_Pol that Republican US @RepGregSteube fell off his roof this afternoon and is being taken to a Sarasota region hospital.

“Through this legislation, we can reform Section 230 and ensure that Big Tech will be held accountable for revoking accounts and selectively censoring conservative content on a partisan basis,” Steube said in a statement obtained by Florida Politics.

Christian Zeigler, the state GOP’s vice chair, said, “Our country, state & local community needs him to recover and get back to fighting for us in Congress ASAP.”

Thinking of you and hope for a speedy recovery.