Congressman reaches out to families of fallen troops - The Horn News 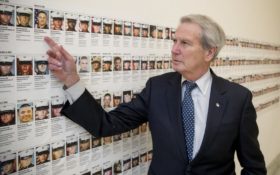 On a Sunday morning more than two weeks after four U.S. soldiers were ambushed and killed in Niger, Rep. Walter Jones sat at the desk in his North Carolina office, doing what he’s done more than 11,000 times in 14 years: signing letters to families of the dead troops.

“My heart aches as I write this letter for I realize you are suffering a great loss,” the letter begins.

It’s a form letter, but the Republican congressman signs each one personally — penance, he says, for voting yes for the Iraq war in 2002.

“For me, it’s a sacred responsibility that I have to communicate my condolences to a family,” Jones said in a telephone interview. “And it’s very special to me because it goes back to my regretting that I voted to go into the Iraq war.”

While President Donald Trump and his staff feuded publicly this month with a congresswoman and the pregnant widow of a soldier killed Oct. 4 in Niger, Jones was quietly continuing his letter writing.

He gets permission from a military liaison who makes sure that family members want condolences from a congressman they likely never heard of. Then, from a desk drawer in his office in Greenville, he retrieves the same black ink fountain pen that he’s used since he began this ritual years ago. In some cases, he sends letters to multiple relatives of a single soldier.

Jones’ letter-writing began in 2003 after he attended the funeral of Marine Sgt. Michael Bitz, who was killed in March 2003, not long after the Iraq war began.

He sat with Bitz’s widow, Janina, and watched as her young son played with a toy nearby during the service at Camp Lejeune, which is part of Jones’ district.

“And I felt the guilt, but also the pain of voting to send her husband as well as thousands of other military to a war that was unnecessary,” he said. “Obviously, the majority of these families will never know me and vice versa. But I want them to know that my heart aches as their heart aches.”

The Iraq war has been followed by a succession of deadly conflicts with Al Qaida, the Islamic State and their kindred terrorist groups in the Middle East, Asia and now Africa.

On Sunday, Oct. 21, Jones signed letters to the families of Sgt. La David Johnson and three other soldiers killed in a firefight with militants tied to the Islamic State group in Niger. He signed a total of eight letters that day, followed by evening Mass.

Days earlier, Trump became embroiled in a public dispute with Rep. Frederica Wilson, who had been in the car with Johnson’s widow when Trump called to offer condolences. Wilson called Trump’s comments insensitive and hurtful — assertions seconded by the widow, Myeshia Johnson, and her mother-in-law. Trump blasted back on Twitter.

It came about after Trump had been silent about the four deaths for more than a week.

Janina Bitz-Vasquez, the widow of the Marine whose funeral triggered Jones’ epiphany, won’t say if she supports Jones’ stance on the war. She said she’s honored that he continues to honor the families of dead service members.

More importantly, she said, it “sets a standard for taking personal responsibility and accountability” for other political and military leaders.

Jones, 74, was first elected to the House in 1994. He estimates that 70,000 or so veterans lived in his district in 2002. Most, Jones said, believed that Iraq had weapons of mass destruction, as President George W. Bush and his administration told the public — a belief that turned out to be unfounded.

Jones still blames himself for his vote, even though he alone couldn’t have altered the 296-133 decision.

“I will never forget my mistake because people died because of my mistake,” he said. “I bought into believing that President Bush didn’t really want to go to war. That’s how naive I was at the time. … I could have voted no, and I didn’t.”

Each day, Jones walks past a memorial in the hallway outside his office in the Rayburn Building showing the faces of about 580 Marines who were stationed at Camp Lejeune and who died in war. They include Bitz, whose death spurred Jones’ search for penance.