Congressman bitten by fox on Capitol Hill - The Horn News 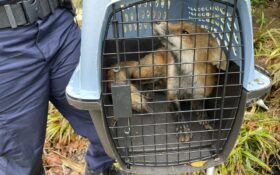 Capitol Hill has a fox problem. And that’s not the lead-in to a joke.

Rep. Ami Bera, D-Calif., learned firsthand Monday evening while walking to the Capitol for votes. Now he’s undergoing a series of four rabies shots out of an abundance of caution.

Bera said he felt something lunge at him from behind as he walked near one of the Senate office buildings. He turned and used his umbrella to fend off what he thought would be a small dog, but he soon realized he was tangling with a fox.

Bera said the encounter lasted about 15 seconds. A bystander yelled to alert others and the fox fled as U.S. Capitol Police officers ran up on the scene. A medical doctor, Bera looked for puncture wounds. He didn’t see evidence of any, but there was some abrasion, so he consulted the Capitol physician, who told him not to take any chances and to get treated.

He said he went to Walter Reed National Military Medical Center after votes for the first of a series of four shots.

“I would say it’s the most unusual day on the Hill in 10 years,” Bera said of his experience.

Of course, there were many joking references to Fox News at the Capitol on Tuesday. But the House Sergeant at Arms was serious when telling lawmakers and their staffs Tuesday afternoon that there had been multiple recent fox encounters and that the animals should not be approached.

The warning noted that there are possibly several fox dens on the Capitol grounds and that animal control personnel would be seeking to trap and locate any that they find.

In at least one case, they were successful. Capitol Police tweeted pictures of one fox safely captured in a cage.

Bera harbored no ill will toward the culprit.

“Hopefully, the animal can be relocated,” he said.