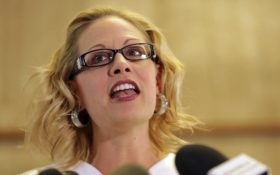 Fresh off a Senate loss in the Georgia runoff, Senate Republicans plan to push a bill giving U.S. citizenship to millions of illegal aliens during the lame-duck session of Congress.

With huge numbers of aliens swarming the southern border during the Biden-Harris administration, “moderate” Republicans think granting amnesty to at least two million illegal immigrants is the way to go.

Talks have begun between Sens. Thom Tillis, R-N.C., and Kyrsten Sinema, D-Ariz.—and The Horn has obtained the details.

According to a proposal circulating through the Capitol, the latest amnesty push would be sold by saying it benefits an estimated two million illegal immigrants who say they were brought into the country as children.

Details of the proposal were shared with a Washington Post columnist… and they aren’t pretty.

First, the bipartisan amnesty talks are reportedly aiming to put millions of illegals on some path to citizenship.

So, it’s unclear how the end result will differ from the proposed DREAM Act.

The new proposal would apparently yield the same result. These “DREAMers” — those who would have benefited from the proposed DREAM Act — would be fast-tracked toward U.S. citizenship.

Secondly, the proposal would also speed up processing for asylum-seekers. The number of refugees the U.S. admitted already doubled in 2021 compared to 2020. Unfortunately, petitioning for asylum is one of the most fraud-riddled parts of immigration law. Lawyers coached illegal aliens on how to lie to U.S. immigration officials to gain asylum status, according to the ABA Journal, the publication of the American Bar Association.

Finally, the proposal would reportedly end the one effective tool of immigration enforcement Border Patrol agents still have: Title 42, which allows law enforcement to remove illegal aliens from the U.S. to prevent the spread of infectious diseases.

Title 42 has removed 2.3 million migrants from the U.S. As it is, it is set to expire on December 21. Extending that date should be important to Joe Biden, who still believes fighting COVID-19 is a top priority.

The proposed amnesty bill would allow Title 42 to continue until Regional Processing Centers can be constructed to super-charge processing illegal immigrant asylum-seekers. The senators estimate this will take one year.

If Title 42 is repealed, the Mexican border will be overrun by “ an avalanche of people; a sea of people,” one Venezuelan asylum-seeker told the New York Post.

Granted, the proposal reportedly includes more funding for border officers—but what difference will it make if Biden continues to keep them on a leash and stop them from doing their job?

Conservatives say the problems with the Tillis-Sinema amnesty plan should be obvious.

“If you grant amnesty in the middle of a border crisis, all you are doing is incentivizing more people to cross the border illegally,” said an op-ed on RedState.com. “The same is true for expediting asylum claims. All that does is ensure more people are released into the interior more quickly. The end result is a lot more dead men, women, and children at the hands of human traffickers and the elements.”

Plus, this plan shoots holes in Republican claims that they care about border security, immigration hawks say.

“Even though power is about to change hands in one chamber, various media outlets report there will be attempts to push damaging immigration legislation such as a mass amnesty,” the Heritage Foundation said in a joint letter with other think tanks. “Do not allow special interests to take advantage of the lame-duck session to pass their bankrupt immigration agenda.”

You don’t have to read between the lines: Senate Democrats outright tell you illegal immigrants matter most to them.

“I am determined to do everything in my power to help deliver a Christmas miracle for DREAMers,” Senator Dick Durbin, D-Ill., tweeted Monday.

But in the Democrats’ world, American workers get coal in their stockings. Earlier this week, a reporter asked President Joe Biden why he would visit Arizona, a border state, yet refuse to visit the border for the first time in his political career.

“There are more important things going on,” said Biden one day after a Border Patrol agent was killed during a chase with illegal immigrants in Mission, Texas.

DISGUSTING: Joe Biden visits Arizona & accidentally confirms what we all knew: he does not care one bit about the Border Crisis.

Reporter: “Why would you visit our state and not visit the border?”

Sleepy Joe: “There are more important things going on” pic.twitter.com/pPBGPktOti

As author of the Dream Act, I applaud every good faith effort to give these deserving individuals a path to citizenship. I’ve been in touch w/ my colleagues & will carefully review their proposal.
I'm determined to do everything to help deliver a Christmas Miracle for Dreamers. https://t.co/qABW47cIUM

Political observers ask the same question: Why are Republicans racing to support another amnesty plan when the GOP will take control of the House of Representatives in just a month?

“This shouldn’t even be a discussion before the new Congress is seated,” said the Red State op-ed.

It shouldn’t even be a discussion after the new Congress is seated, either.