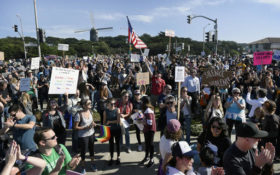 President Donald Trump and his conservative supporters have long suspected that anti-Trump protesters are being paid by wealthy liberals to take to the streets and defy the president.

Turns out they are — and there’s proof.

While liberals have vehemently denied the claims, The San Francisco Chronicle reported Saturday that a large number of employers in the tech heavy silicon valley are paying their liberal employees to participate in these rallies.

“Since the beginning of the year, an increasing number of companies have unveiled policies that allow employees to take paid time off work for political of civic activities, such as protesting,” The Chronicle reported.

Yes, that’s right. If you work in San Francisco, you can get extra paid days off… if you protest Trump.

The San Francisco marketing firm Traction is allowing employees two paid “Days of Action” for which they can take to the streets and whine about their disagreements with Trump — and still cash in those shiny tech paychecks.

The majority of the companies operating these policies are smaller, but there are some notable exceptions.

Facebook gave employees paid leave to attend May Day protests, the pro-communism — and consequently anti-Trump — rally taking place on the first day of the month.

The Chronicle notes that this luxury is not one every company can afford.

“Hourly and low-wage workers generally have less flexible leave time and may not be able to take time off unless the business itself shuts down.”

In other words, average and middle class Americans can’t afford to leave their livelihood to stomp their feet in support of Trump’s policies.

That’s only an option for the liberal, coastal elites… who are laughing all the way to the bank.