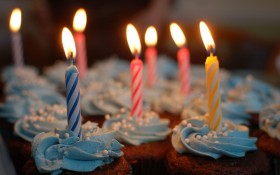 A New Hampshire police officer who responded to a shoplifting incident didn’t make an arrest but instead paid the thief’s tab after learning the woman stole the items to bake her child’s birthday cake.

Officer Michael Kotsonis, a 19-year member of the Portsmouth force, responded to a call last week at the Ocean State Job Lots after a woman had stolen cake mix, shortening and “a couple things of frosting,” the Portsmouth Herald reported.

After learning the woman’s identity, Kotsonis went to her home to recover the items. It was there that he found that the woman was a mother who wanted to bake her child a birthday cake.

Kotsonis says the mother’s actions weren’t right, but, “I’m not going to take away a kid’s birthday cake.” He went back to the store and bought the items. The woman wasn’t charged.

A store employee reported his gesture to the newspaper. Frank Warchol, acting deputy police chief, said he wouldn’t have known about it either if not for a reporter’s call. He said Kotsonis exemplifies the department’s mission emphasizing community, commitment and compassion.

“I didn’t do it for the attention,” Kotsonis said Tuesday. “What you do when no one is looking, that’s the character of someone.”