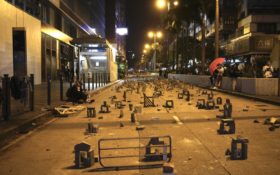 About 100 anti-government protesters remained holed up at a Hong Kong university Tuesday, their choices dwindling along with their food supplies as they braced for the endgame in a police siege of the campus that entered its third day.

Police were waiting them out after 10 days of some of the most intense protests the city has seen in more than five months of often-violent unrest gripping the semi-autonomous Chinese city. Over the past day, more than 1,000 people were arrested and hundreds of injured treated at hospitals, authorities said.

The government has stood firm, rejecting most of the protesters’ demands, even as they shut down major roads and trains during rush hour every day last week, turned several university campuses into fortresses and blocked a major road tunnel, which remained shut Tuesday.

In Beijing, the National People’s Congress criticized the high court in Hong Kong for striking down a ban on wearing face masks at the protests, in a decree that has potentially ominous implications for Hong Kong’s vaunted rule of law and independent judiciary. China’s Communist leaders have taken a tough line on the protests and said that restoring order is the city’s highest priority.

Meanwhile, pro-democracy activist Joshua Wong was barred from leaving Hong Kong to go on a European speaking tour, after a court refused to change his bail conditions to let him travel.

Protesters have left all the universities except Hong Kong Polytechnic, where several hundred barricaded themselves and fought back police barrages of tear gas and water cannons with gasoline bombs, some launched from rooftop by catapult, and bows and arrows. 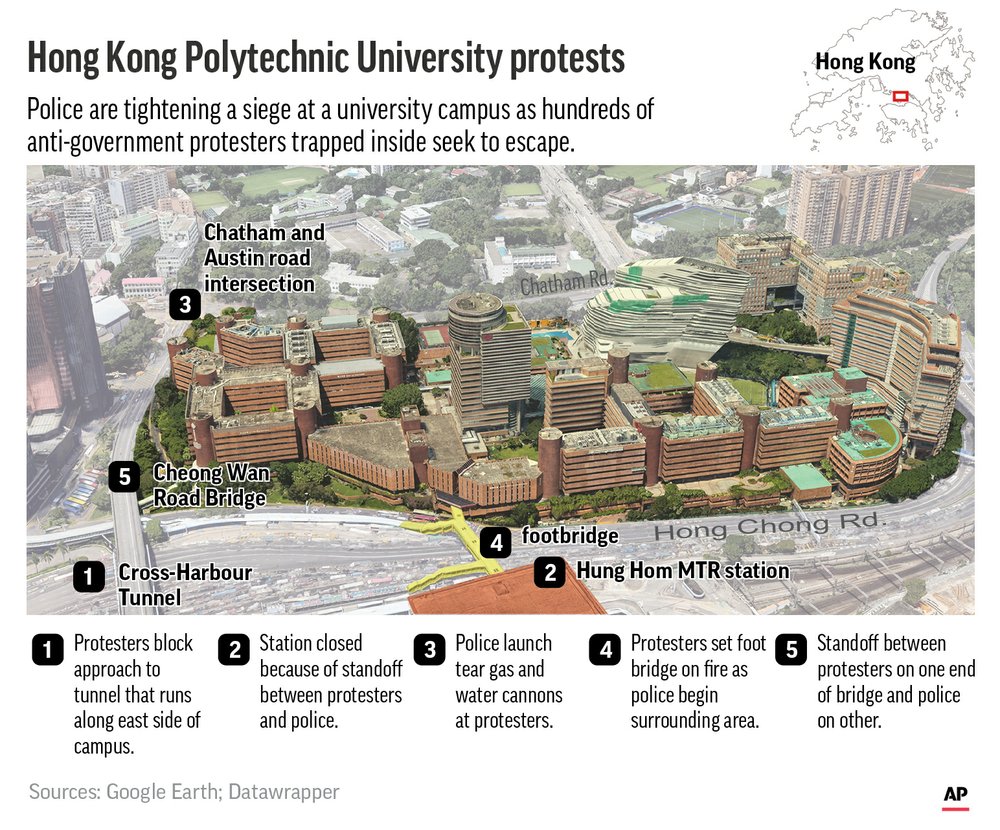 Those still at Polytechnic are the last holdouts. Surrounded, they now face arrest. Several groups have tried to escape, including one that slid down hoses from a footbridge to waiting motorcycles, but police said they intercepted 37, including the drivers, who were arrested for “assisting offenders.”

About 600 had left by Tuesday morning, city leader Carrie Lam said, leaving an estimated 100 still inside. They milled about in small groups. They still had boxes of homemade gasoline bombs, but the mood was grim in the trash-strewn plazas, in contrast to the excitement as they prepared to take on police just a few days earlier.

One protester said he had no plan and was waiting for someone to come to help. Another said he wants to leave safely but without being charged. They would not give their full names out of fear of arrest.

“We will use whatever means to continue to persuade and arrange for these remaining protesters to leave the campus as soon as possible so that this whole operation could end in a peaceful manner,” Lam told reporters after a weekly meeting with advisers.

Even as the latest bout of violence winds down, a fundamental divide suggests the protests are far from over.

City leaders say the violence must stop before meaningful dialogue can begin. The protesters say they need to keep escalating the violence to get the government to accept their demands.

The protests took off in June over a proposed extradition bill that would have allowed suspects to be sent to mainland China for trial. Activists saw the legislation as part of a continuing erosion of rights and freedoms that Hong Kong was promised it could keep when Britain returned its former colony to China in 1997.

Lam withdrew the bill after a few months, but protesters now want an independent investigation into police suppression of the demonstrations and fully democratic elections, among other demands.

About 200 of the 600 people who left Polytechnic were under 18 years old. The city agreed not to arrest them immediately, but Lam said they could face charges later.

Family members and teachers arrived sporadically Tuesday to pick up a few remaining protesters under 18, hugging their children before walking back to a police checkpoint where officers recorded names and other information before letting them go.

An ambulance team was allowed in to treat injured protesters, wrapping them in emergency blankets to keep them warm. Some left with the team, but others stayed, saying they didn’t want to be arrested.

They wore masks and refused to give their names, a sign of the fear that has developed in what has become a highly polarized city.

China hinted it might overrule the Hong Kong high court ruling that struck down a ban on face masks that was aimed at preventing protesters from hiding their identity and evading arrest.

A statement from the National People’s Congress’ Legislative Affairs Commission said the decision doesn’t conform with the territory’s constitution, known as the Basic Law, or decisions by the Congress.

“We are currently studying opinions and suggestions raised by some NPC deputies,” the statement said. The announcement threatens to undercut Hong Kong’s rule of law and independent courts — major selling points for its role as an Asian financial center.

Monday’s ruling said the ban infringes on fundamental rights more than is reasonably necessary. The ban has been widely disregarded.

The Japanese government said one of its citizens had been arrested near the Polytechnic campus. Japanese media identified him as Hikaru Ida, a student at Tokyo University of Agriculture. Officials did not say why he was arrested.

More than 1,100 people were arrested in the past day for offenses including rioting and possession of offensive weapons, police said at a daily press briefing. They found more than 3,900 gasoline bombs at another university campus that was the site last week of a violent standoff. Some 235 people were treated on Tuesday for protest-related injuries, according to hospital authority figures.

Hong Kong also got a new police chief, Chris Tang, who said his priorities would include rebutting accusations against police that he called “fake news” and reassuring the public about the force’s mission.

Tang replaces a retiring chief and was approved by Beijing after being nominated by Lam’s government.

Lam, asked whether she would seek help from Chinese troops based in Hong Kong, said her government remains confident it is able to cope with the situation.