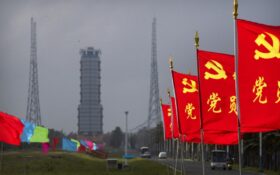 Thousands of athletes, coaches, and support staff are about to descend upon Beijing for the Winter Olympics.

Once there, they’ll face something far more ominous than the ongoing surge in coronavirus cases: Draconian communist laws, severe restrictions on speech, and the threat of expulsion and potentially prison for even the slightest missteps.

“Any expression that is in line with the Olympic spirit I’m sure will be protected,” Yang Shu, deputy director general of international relations for the Beijing Organizing Committee, said in a news conference, according to the Washington Post.

But then his next line sounded more like a warning than a reassurance.

“Any behavior or speech that is against the Olympic spirit, especially against the Chinese laws and regulations, are also subject to certain punishment,” he insisted.

His comments seem to suggest that both the Olympic spirit and Chinese laws and regulations are on the same page.

Like China, the Olympics themselves forbid political and religious expression at the events and within the venues, even though athletes have certainly put that rule to the test in the past.

The difference, as the Post pointed out, is that it’s no longer just a violation of the Games’ charter… but a potential violation of Chinese law, as well as the threat of “certain punishment” under those infamously strict rules.

Beijing is known for its draconian measures regarding speech, attacking anyone and anything for even the slightest criticism.

U.S. companies, business people, and athletes have all come under fire – and faced repercussions – for criticizing China.

They’ve come down on NBA executives and entire teams for speaking out in favor of pro-democracy protests in Hong Kong.

And they’ve been touchy about dozens of other issues, including its concentration camps, where human rights groups say some 1 million ethnic Uyghurs are being held.

Even simply mentioning that Taiwan is a country can draw Beijing’s wrath, which led to an almost comical moment when a member of the World Health Organization hung up mid-interview rather than even acknowledge Taiwan in 2020:

‼️WOW‼️ Bruce Aylward/@WHO did an interview with HK's @rthk_news & when asked about #Taiwan he pretended not to hear the question. The journalist asks again & he hangs up!

She calls back & he said "Well, we've already talked about China."

The thousands of young athletes traveling Beijing will almost certainly not be nearly as cautious, nor should they be.

The fear now is that some of them could find out in real-time just how draconian China’s response on those issues could be as China not only appears ready to crackdown but even seems to be encouraging athletes to report each other, a favorite tactic of communist regimes.

And they could do it by way of an app – one they’re telling athletes to install in their phones, ostensibly to track health during the games, given the pandemic.

Security experts have said the app is full of holes and can be used to access personal data.

But there’s also another problem with it: Along with reporting potential coronavirus symptoms, there is a feature to report “politically sensitive” material, according to a report form the cybersecurity organization Citizen Lab.

There is even a list of political keywords that could trigger such a report.

Human Rights groups are worried about the athletes.

“There’s really not much protection that we believe is going to be afforded to athletes,” Rob Koehler, director general of Global Athlete, told Reuters. “Silence is complicity and that’s why we have concerns. So we’re advising athletes not to speak up.”

But he did suggest one way athletes could get around it… sort of… without remaining silent for long: “We want them to compete and use their voice when they get home.”

China may be able to silence its critics at the Games themselves… but they can’t stop young athletes from speaking out afterward.