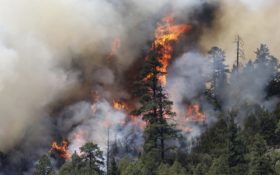 A growing wildfire burning in southwestern Colorado forced more people from their homes Sunday as crews tried to slow the blaze being fed by continued hot, dry and windy conditions.

Authorities ordered the residents of 675 homes to evacuate after the fire burning north of Durango nearly doubled in size overnight to 26 square miles.

Residents of a total of 2,156 homes have been ordered to evacuate as of Sunday afternoon, La Plata County spokeswoman Megan Graham told The Durango Herald.

No homes have been lost to the fire, which is 10 percent contained.

The cause of the blaze, which is being called the 416 Fire, which started June 1 in the San Juan National Forest, has not been determined. It comes amid a severe drought in the Four Corners area where Arizona, New Mexico, Utah and Colorado meet.

Incident commander Todd Pechota told evacuated residents Saturday that the situation is “going to get worse before it gets better,” the Herald reported.

A historic scenic railroad popular with tourists who come to area for hiking, camping and biking in the summer has stopped running because of the fire. The Durango & Silverton Narrow Gauge Railroad is considering offering limited service later in the month with locomotives powered by diesel rather than its typical coal-fired engines, which can throw sparks.

The fire is the largest of several burning in Colorado, including another fire that broke out nearby Friday. Firefighters were able to respond quickly to another fire that started Saturday near Wolcott. Authorities there are asking for the public’s help looking for three men seen leaving the area where it started.

Fire officials have been expecting a busy wildfire season after a dry winter, possibly the worst since 2012 and 2013, when the Black Forest Fire in El Paso County destroyed nearly 500 homes, the most in state history.