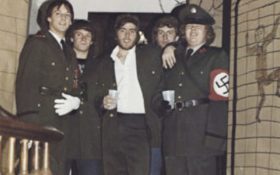 A Pennsylvania college trustee apologized and announced his resignation Tuesday after a student found a 1980 yearbook photo in which the trustee wore a Nazi uniform costume.

Gettysburg College President Janet Morgan Riggs said in an email to the college community that Bob Garthwait decided to step down from the board of trustees.

Garthwait is a financial donor to the college and helped found the Garthwait Leadership Center on campus.

A student brought the photo to the attention of a faculty member last week, and the administration was contacted.

The student newspaper, the Gettysburgian, published an image of the photo , which depicts Garthwait in a military uniform costume with a swastika armband and four other people, including at least one other who also appears to be in a military costume. They were standing next to drawings of razor wire and someone trying to climb a fence.

The photo surfaced weeks after the disclosure of a photo on the medical school yearbook page for Virginia Gov. Ralph Northam that showed one person in blackface and another in Ku Klux Klan robes. The state’s attorney general, Mark Herring, then came forward to say that he had dressed in blackface in college.

Riggs’ email quotes a message from Garthwait that says he dressed as a Nazi soldier in a POW camp as part of a “Hogan’s Heroes” TV show theme party at a fraternity.

Garthwait, who did not return a message seeking comment left at his workplace, said that as a college sophomore, he “was not fully aware of the significance of those symbols.”

“My sincere hope is that our current students will learn from my poor judgment 38 years ago and be more thoughtful than I was about the impact of their actions on others,” Garthwait said in Riggs’ email. “I extend my sincere apologies to the entire Gettysburg College community, and I humbly ask for your forgiveness.”

Student Hannah Labovitz, a sophomore history major from Pittsburgh, said another student showed her the photo last week, and by the next day she had figured out that Garthwait was the person in the photo wearing a swastika armband.

Labovitz said Garthwait’s resignation from the board shows he understands “how serious the situation is.”

“It wasn’t just him — it was the school that allowed this to be in the yearbook and there were zero complaints when it was allowed to be published,” Labovitz said Tuesday.

Riggs said in the email to the campus community that she learned of the photo on Sunday and met with the students who brought it to light on Monday.

“Anti-Semitism clearly contradicts our values as an institution today, as it did when this photo was taken,” Riggs said, promising discussions with the board about the matter.

“The longer we hang onto the money, the longer and more conflicted the story becomes,” Stern said.