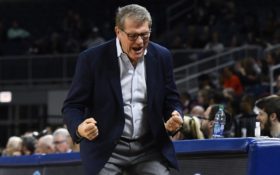 UConn coach Geno Auriemma is scheduled to undergo minor surgery Wednesday that could keep him off the court for the Huskies’ game this weekend against Oklahoma.

The school says the 65-year-old Hall-of-Famer will undergo a procedure to relieve symptoms of diverticulitis, a condition where the colon develops small bulges that can sometimes become infected. The surgery will require a short hospital stay and rest.

It is not clear when doctors will allow Auriemma to resume coaching.

The No. 2 Huskies face the Sooners on Sunday in the Hall of Fame Showcase at the Mohegan Sun arena in Uncasville. They don’t play again until Jan. 2 when Wichita State visits Hartford.

Associate head coach Chris Dailey will take over. She’s coached the Huskies to a 9-0 record in games Auriemma has missed during his 35 seasons at Connecticut.