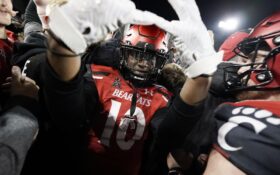 As college football’s postseason evolved from disconnected bowls to the BCS to the current four-team playoff, it never truly embraced the underdog the way the NCAA basketball tournament does.

From Tulane to Utah, Boise State to TCU and then UCF, the upstarts occasionally got a chance to play a blue blood in a big bowl game, but they never entered the postseason with a legitimate opportunity to win a national championship.

The Bearcats will play Alabama in the Cotton Bowl on New Year’s Eve after being selected to the College Football Playoff on Sunday. Michigan will face Georgia in the Orange Bowl semifinal on Dec. 31 and the winners will play for the national championship on Jan. 10 in Indianapolis.

Fourth-seeded Cincinnati is the first team to reach the CFP from a non-Power Five conference in the eight-year history of this postseason format. The Bearcats (13-0) won the American Athletic Conference and head into the postseason as the only unbeaten team in the country.

“It’s an historic day. It really is. In the world of sports, this is history,” AAC Commissioner Mike Aresco said. “This is something probably many, many people never thought they would see.”

Previously, no team from a so-called Group of Five conference had ever even come close to making the playoff.

“We don’t want to carry the flag for the non-big schools, so to speak. We just want to be us,” Cincinnati coach Luke Fickell said.

When the Bowl Championship Series started in 1998, Tulane went unbeaten in Conference USA and didn’t even get a spot in one of the glitzy bowl games. Former Tulane President Scott Cowen was among the first to attack the BCS as an exclusionary cartel.

Under then-coach Urban Meyer, Utah went unbeaten as a member of the Mountain West in 2004 and reached the Fiesta Bowl, but only got to play a so-so Pittsburgh team, meaning the Utes had no shot to finish No. 1.

Boise State created a brand out of being a potential BCS buster during its time in the Western Athletic Conference, winning a remarkable Fiesta Bowl against Oklahoma in 2007. TCU was in the Mountain West when it won a Rose Bowl against Wisconsin in 2010.

Utah and TCU ended up getting scooped up by Power Five conferences. If you can’t beat them, ask them to join you.

The playoff doubled the number of teams that had a chance to win the national title from two to four in 2014, but it didn’t seem to help the little guys.

UCF won 25 straight games over 2017 and ’18 and never did better than eighth in the selection committee’s rankings. The Knights went so far as to declare themselves national champions after they were the only team in major college football to finish the 2017 season unbeaten.

Cincinnati set the foundation for this year’s run by going unbeaten in the regular season last year before losing to Georgia on a late field goal in the Peach Bowl.

Aresco conceded this run has felt bittersweet at times for him. Cincinnati, along with UCF and Houston, will be leaving the American for the Big 12 soon.

The Bearcats made history with little debate. Playoff selection committee chairman Gary Barta said there was strong consensus for Cincinnati at No. 4 ahead of No. 5 Notre Dame, which had only one loss — at home against the Bearcats in early October. Ohio State finished sixth.

“This will be a real challenge for us in every way, shape and form,” Alabama coach Nick Saban said.

The Bearcats might not have been so comfortably in the field had things gone differently at the Big 12 championship game Saturday. Oklahoma State, which was No. 5 in the CFP rankings going into the game, came up inches short of scoring a go-ahead touchdown in the final minute of its loss to Baylor.

Saban, who noted he played at Kent State in the Mid-American Conference, said Cincinnati’s achievement is a positive development for the sport.

“I absolutely think that everyone who participates in college football Division I level should feel like they have an opportunity to get in the playoff,” Saban said.

It is the third time two teams from the same conference are in the CFP and the second time it has happened with the Southeastern Conference. For years ago, Alabama beat Georgia in overtime to win the national title.

As conference leaders consider expanding the playoff from four to 12 teams as soon as 2024, only two Power Five leagues will be represented this season: the SEC and Big Ten. The Atlantic Coast Conference missed out for the first time. The Big 12 was shut out for the second straight season and the Pac-12 for the sixth time will not have a team in the playoff.

The other big bowl games were also set:

Cincinnati’s reward for making history is a matchup with the defending national champions at the home of the Dallas Cowboys.

The Crimson Tide is in the playoff for the seventh time after handing Georgia its first setback of the season in the SEC title game Saturday.

Alabama (12-1) seemed to be a loss away from being eliminated from playoff contention heading into its game with Georgia. Instead, Bryce Young and the Tide lit up the Bulldogs’ vaunted defense to earn the top seed.

Saban’s Alabama dynasty has won three playoff championships to go along with three BCS titles since 2009.

Georgia (12-1) managed to stay in the field as the third seed, becoming the second team to lose its conference title game and make the playoff. Notre Dame did the same thing last season, when it lost a rematch with Clemson in its lone season playing in the ACC, a move prompted by pandemic-altered schedules.

The Bulldogs will be making their second CFP appearance when they meet second-seeded Michigan (12-1) in the Orange Bowl. Coach Jim Harbaugh and the Wolverines are in the playoff for the first time after winning the Big Ten for the first time since 2004. Michigan, which went 2-4 last season, is also the first team to make the playoff after being unranked in the preseason AP Top 25.