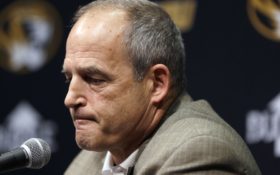 Pinkel told ABC17 TV in Columbia Saturday that he had treatment last month after his cancer came out of remission for the first time in four years.

Pinkel retired after the 2015 season after announcing that he had non-Hodgkin lymphoma. He coached the Tigers from 2001 to 2016, compiling a 118-73 record.

He says his type of cancer will never be healed and he intends to keep fighting it.

Pinkel, who is 67, has been a fundraising liaison with the Missouri athletics foundation. He also started the “GP MADE Foundation” to raise money for cancer research and programs to help underprivileged and special needs children.