Colin Kaepernick sues NFL (“pay me or else!”) - The Horn News 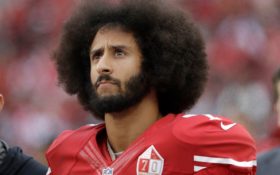 Ever since he started one of the biggest controversies in the United States, former San Fransisco 49ers quarterback, Colin Kaepernick has not be doing much — first as a benchwarmer, now as an unemployed has-been.

…except, of course, demanding money for nothing. Kaepernick has filed a grievance against the league for intentionally keeping him out.

Last season, Kaepernick started the most unpatriotic movement in NFL history by taking a knee during the national anthem. It was an act many Americans saw as extremely disrespectful to the American flag and the soldiers who have risked their lives for this country.

The nasty act of dishonor towards the national anthem has become a widespread movement throughout the league, and  has also spread beyond to high school players and cheerleaders, universities and colleges… and even a German soccer team.

The anthem demonstrations have been repeatedly criticized by President Donald Trump — and upset Kaepernick.

Why should everyone else get the attention… and the paychecks?

Kaepernick terminated his contract with the 49ers in March and has not found a team willing to sign him again. Many NFL players credit this to Kaepernick’s anthem demonstrations. Others say he’s just not very good at football.

Either way, the move threatens to escalate a dispute that has shocked many players who believe the owners are penalizing Kaepernick for kneeling.

The New York Times reported that the grievance filed by Kaepernick will be heard by an arbitrator under the terms of the labor agreement between the union and the league. Kaepernick’s lawyer, Mark Geragos, said in a statement that Kaepernick had exhausted “every possible avenue with all N.F.L. teams and their executives.”

Geragos & Geragos official statement on @Kaepernick7 who we are proud to represent pic.twitter.com/c0Jr1ugNV1