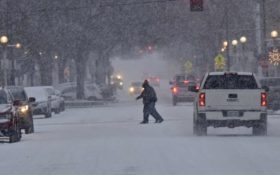 When the winds howl and the bone-numbing cold sets in, scores of North Dakotans willingly become lawbreakers by warming up their vehicles without being in them, ignoring a potential $1,500 state fine and 30 days in jail.

“It’s ineffective. The people ignore it. Let’s get rid of it,” said Republican Rep. Daniel Johnston, who is sponsoring a bill that would make it legal for people to leave their vehicles running unattended, amending a statute that has been on the books since the 1940s that no one can remember being enforced.

“Simply put, the law goes against the will of the people,” Johnston told the House Transportation Committee Friday. “The citizenry of North Dakota recognizes this is a bad law.”

Others don’t even realize it’s on the books, he said.

Donnell Preskey, executive director of the North Dakota Sheriffs and Deputies Association, told the panel that her group supports amending the law. No one spoke against it.

North Dakota’s law was put on the books nearly 75 years ago as a deterrent against automobile theft. Several states in recent years have enacted anti-idling laws in an effort to improve air quality.

National Conference of State Legislatures data shows nine states have laws to curb vehicle idling and another 14 limit idling for certain vehicles, such as state-owned vehicles and school buses.

Even environmental group Sierra Club is not standing in the way of the effort to make idling legal. Wayde Schafer, the group’s North Dakota spokesman, said banning idling vehicles is futile in North Dakota, where it’s considered a necessary evil because of brutal winter weather.

“It’s so engrained in our culture and people will never change their habits even if they know it’s against the law,” Schafer said. “It’s part of winter in North Dakota, and people want to get into a warm car, so what do you do?”

Schafer said his group will not take a position on the proposed legislation.

Bismarck Police Chief Dave Draovitch, who has spent nearly three decades with the department, said idling vehicles that are left unattended is not something that officers enforce.

“If we ever wrote a citation for it, I’d be surprised,” Draovitch said.

“We’d rather have vehicles locked,” Draovitch said, adding that leaving vehicles running while unoccupied creates a golden opportunity for thieves.

Fargo police spokeswoman Jessica Schindeldecker said most vehicles stolen in North Dakota’s biggest city occur in the winter, and most are because they are left idling with the doors unlocked.

Schindeldecker did not know if anyone had ever been cited for leaving a vehicle idling, but she said officers sometimes “chat with the owner, and tell them they just want them to stop doing it.”

Jennifer Wagner of Minot had her vehicle stolen years ago after leaving it running to drop off some items at her church. She now owns a business with her husband that installs remote starters that allow a driver to preheat a vehicle before getting into it.

Most remote starters are equipped with anti-theft systems that won’t allow the vehicle to be opened or driven without a key, she said.

“Most people probably don’t even know about the law, and even if they do they don’t care and are willing to take the risk,” she said.

Her business, Too Dark Motorsports, is one of dozens in the state that sells and installs remote starters, which are often booked two to three weeks out in the winter, she said.

Wagner said she and other North Dakotans don’t buy the argument that vehicles warm up quicker while being driven. About 30 people set up appointments one day last week when a dangerous cold snap hit the region.

“No one wants to get in a frozen car in North Dakota and let it warm up,” she said. “No one.”