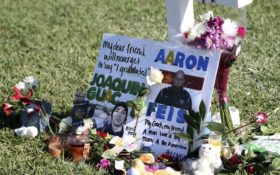 The ESPYs are breaking tradition for this year’s Best Coach Award, awarding it posthumously to three Florida high school coaches who died shielding their students from gunfire.

Students described Feis as someone who counseled those with no father figure and took troubled kids under his wing. He was always there for the students, they said, whether it was chatting in his golf cart or helping them fix their cars. No one was surprised when they learned Feis died shielding students.

The school’s athletic director, 49-year-old Chris Hixon, wasn’t shy about jumping in wherever he was needed, whether it was filling in as volleyball coach or wrestling coach. When the school needed someone to patrol the campus and monitor threats as a security specialist, Hixon, a married father of two, did that, too. He died running toward the gunfire to help fleeing students.

Geography teacher and cross-country coach Scott Beigel, 35, helped students enter a locked classroom to avoid the gunman, and paid for the brave act with his life. Several surviving students said they don’t think they would be alive without Beigel’s help.

The award has previously gone to coaches who guided their teams to extraordinary performance — not for heroism off the field.

ESPN’s Vice President Alison Overholt called the Florida men heroes, saying they are being honored for “their immeasurable bravery in the face of danger and for their ultimate sacrifice to protect the lives of countless students.”

The award show hosted by Danica Patrick will air live on ABC on July 18.