Coach makes cruel call in game, embarrasses his own player when... - The Horn News 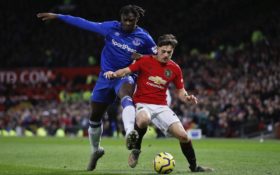 Moise Kean trudged along the touchline, his head facing the ground and never moving, after what for many soccer players is the ultimate indignity.

The Everton striker had just been substituted, shortly after having come on as a substitute. There were still a few minutes left in the game against Manchester United in the Premier League on Sunday but Kean wasn’t going to hang around to watch it.

Devastated, quite understandably, he headed straight to the locker room. He had been humiliated by his manager in front of more than 75,000 spectators at Old Trafford — the grandest stage in English soccer — and in front of a huge worldwide audience.

His confidence already likely fragile after a tough start to life at Everton, this could mark the beginning of the end of Kean’s time at the club.

“He’ll come again, he’s only 19,” Duncan Ferguson, the caretaker Everton manager, said of Kean after making his ruthless decision. “It was nothing to do with him as a player.”

Try getting Kean to understand that.

There was a look of shock on the Italy striker’s face as he saw his number flash up on the board being held aloft by the fourth official, signifying he was being substituted. It was the 88th minute, and he had only come on in the 70th. He had touched the ball nine times, having been asked to play out of position on the right wing and basically in a defensive role as United dominated the ball seeking an equalizer.

Kean glanced around with a “What? Me?” look on his face when he realized he would be coming off. Potentially more hurtful for Kean might be the resulting reaction of Ferguson, who turned his back on Kean as the player left the field.

Kean didn’t think twice, walking straight along the touchline in front of United’s fans as the match continued.

“I just thought he had not quite got into the pace of the game,” said Ferguson, whose reputation as a fearsome, no-nonsense player has continued into management. “But also, I had so many attackers on the bench and I needed to make a change to kill a bit of time.

“That’s all it was, really. Just to get fresh legs on, and unfortunately he was the man who missed out.”

The reasoning might make sense purely in soccer terms. But on a human level, it was a bad call. Surely reassuring Kean as he came off was the least Ferguson could have done. Instead, he blanked his confused young striker in a show of apparent disgust.

Contrast this to the day Kean was signed, to much fanfare, from Juventus in August. He arrived with a big reputation — two goals in three games for Italy, the youngest debutant for Juventus at 16 and 23 days in the 2016-17 season — but with memories still fresh of an incident in April when he was racially abused by Cagliari fans seemingly riled by his celebrations after scoring a goal for Juve.

Adding to the outcry during that particular incident was the response of Kean’s then-teammate, Leonardo Bonucci, who said Kean — who is black — was partly to blame for the racist reaction of the Cagliari supporters.

Given this incident and the fact that Kean is still a teenager, Everton vowed to take care of Kean upon signing him.

At Kean’s presentation, Everton’s director of football, Marcel Brands, handed over a specially created jersey for the player’s mother, who was accompanying him.

“We’ll look after your son,” Brands said in front of the cameras.

With no goals in 14 appearances mostly off the bench and having now been embarrassed by his manager, Kean might need to feel some warmth and compassion if his Everton career is ever going to take off.