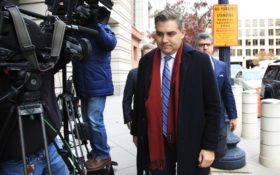 CNN ratings are in the cellar — and it seems the stress is getting to everyone.

The liberal network’s White House correspondent Jim Acosta appeared on The Hugh Hewitt Show on Tuesday, and had a meltdown when the host mentioned Fox News’ Sean Hannity and Tucker Carlson.

The meltdown was reportedly over Acosta’s request for an interview by Hannity and Carlson, the top-rated cable news television shows. The Fox News stars have refused to invite Acosta on their programs during his latest book tour.

Acosta has reportedly begged for an appearance on the programs, but was denied.

That seems to have left Acosta upset — and now he’s on the warpath.

On Hewitt’s show, the CNN star accused Hannity and Carlson of being propagandists that get their talking points straight from the White House and said they were no better than Cuban state television.

At “certain hours of the day on Fox … it is very much a house organ for the president,” Acosta told Hewitt.

“Have we ever witnessed a situation like that, where a network essentially just serves as an amplifier of the president’s message of the day?” he asked. “And to some extent, focused and fixated on the conspiracy theories that he spreads. That to me is very much the definition of propaganda and state TV.”

Hewitt pushed back at the controversial CNN correspondent’s inflammatory remarks.

Later in the interview, Acosta began ranting directly about Hannity and Carlson.

“The likes of Sean Hannity and Tucker Carlson, they’re willing to go off on me on their shows, but they’re not willing to have me on in person to defend myself!” Acosta said about the programs denying his interview requests.

“What’s with that? If you’re so darn tough, why don’t you give me an invitation to come on your show?” he asked.

https://t.co/CkvnHh3G2j
It’s true Fake News Acosta’s reps have BEEN BEGGING to be on the #1 show on Cable News & 618 Of the top Talk Radio stations. Sorry, I wont subject my audience to conspiracy theory fake news. Go hawk that garbage on the lowest rated cable channel u work for