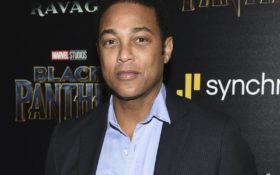 Earlier this month, CNN’s Don Lemon was accused of sexually assaulting a bartender.

The bombshell accusation came from one Dustin Hice, who claimed that drunk Lemon grabbed his genitals and whispered lewd things at him in a Hampton’s bar in New York a year ago.

On Friday, a witness stepped forward to corroborate the accusation, according to Fox News.

Hice’s supervisor, George Gounelas, claimed that he was with the plaintiff when the two approached Lemon to buy him a drink.

According to Hice, Lemon declined the offer.

This is where Gounelas added his perspective to a story that’s already incredibly bizarre. The witness alleged that Lemon approached the two later in the night.

“Don Lemon has now come around the corner and is standing face to face with us,” Gounelas told Mediaite. “There is a beam, a pole, in the place. Don’s standing up against the pole, face to face with Dustin, I turn around and I’m standing right there between the two of them. He’s saying, ‘So you like me? Is that why you’re bothering me?’”

Here, Lemon apparently touched his own genitals then touched Hice’s nose with the same hand, Gounelas told Fox News — in line with the same account that Hice told.

Gounelas said that he found it funny.

But Hice was disturbed, and for days and months later, mentally broken, his lawsuit says.

According to Gounelas, it seems as though what happened in the Hamptons quickly made its way around town — and Hice suffered because of it.

“The place was packed. I’m sure other people saw. It was a known thing in the Hamptons, not like this quiet thing. Everybody knew Dustin and what happened to him. Every time we went out, every bartender offered him a Lemon drop shot, making fun of him.

It seems as though the evidence is fast piling up against Lemon.