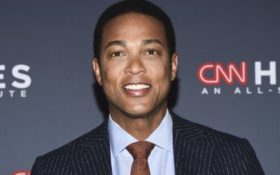 It’s an expectation that primetime hosts of Fox News, CBS, and MSNBC will face public scrutiny. After all, they get paid millions of dollars a year to do so.

But CNN star Don Lemon isn’t happy that he’s getting criticism — and he says he’s about the quit.

Lemon says President Donald Trump’s “toxicity” makes his job no fun, and he’s ready to hang up the microphone.

“I don’t know if it’s worth this level of toxicity,” he said at a speaking engagement in New York City on Thursday.

He claims he’s been harassed by Trump supporters, who call him fake news.

He also told audience members that he’d been doxxed, a form of cybersecurity breach where hackers post the target’s online information such as home address or phone number publicly on the internet. In 2017, CNN famously threatened to dox a Trump voter unless he apologized for making a gif critical of their network.

Now, in the midst of record low ratings, Lemon is questioning his future in cable news.

“I wonder how long I will continue to do this particular job,” he said, according to The Daily Beast.

The end has come quickly for Lemon. A little more than a year ago, the CNN star was partying with lawyer Michael Avenatti — the same Avenatti who was allegedly running multiple illegal schemes — including a years’ long embezzlement scheme where he stole millions of dollars from his paraplegic client.

It’s okay. I saved that deleted tweet of CNN hosts partying it up with Avenatti. Why would such a thing need to be deleted? pic.twitter.com/iutCtnwaxi

Earlier this year, Lemon attacked the children from Covington Catholic High School — and refused to apologize for spreading the false narrative that they were harassing Native American students. Instead, Lemon said the media attacks were justified because the children were wearing Trump hats.

In 2014, Lemon was ranked the worst journalist in television by the Columbia School of Journalism.

When asked what he might do next if not a television anchor, Lemon joked that he’d like to be a celebrity chef.

If you can’t handle the heat, stay out of the kitchen.