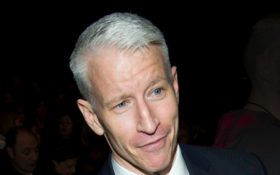 CNN’s Anderson Cooper spends so much time reporting fake news stories that apparently he even lies to the public about his personal life, too.

Cooper, who is already paid a handsome salary to recite anti-President Donald Trump stories, is receiving his billionaire mother’s entire estate — something he said he wasn’t going to do.

Simply put, he lied trying to protect his phony image on CNN.

Cooper’s mother, billionaire Gloria Vanderbilt, died in June after a battle with stomach cancer. She was 95 years old.

But five years ago, Cooper spoke with famous radio host Howard Stern in an interview and told the world that he wasn’t getting a penny from his mother. Vanderbilt was estimated to have been worth $200 million.

“My mom’s made clear to me that there’s no trust fund. There’s none of that,” Cooper told Stern. It seems that there must be some mistake then, or that Cooper was just blatantly lying about his soon-to-be riches.

After all, pandering to other liberals is what liberals do. And according to them, if you want to be far-left, rejecting millionaires and billionaires publicly is the name of the game.

Cooper does not want his fans knowing about this.

“I don’t believe in inheriting money,” Cooper said in the same interview. “I think it’s an initiative sucker. I think it’s a curse.”

Consider him cursed then — the wealthy journalist and face of fake news receiving more millions of dollars to an already healthy salary. And to make matters worse, both his older brothers are barely getting a dime of the wealth.

According to Daily Caller, Vanderbilt’s eldest son, Leopold Stokowski is receiving her New York City apartment in Manhattan, and her other estranged son Chris Stokowski is getting nothing.

According to Page Six, Chris removed himself from the entire family after getting into a spat with Vanderbilt’s psychiatrist.

So the riches all go to Cooper — perhaps he’ll do a favor to the media world and retire — now that he’s even more set up for life he doesn’t have to tell the world fake news stories anymore.