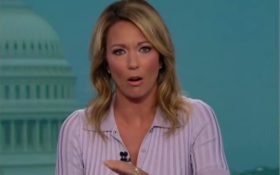 The controversy surrounding illegal immigrant family separation has caused a mainstream media feeding frenzy this week — but when CNN tried to get in the middle of the action Tuesday, it blew up in the network’s face.

Instead, Baldwin was left gasping when she learned the harsh truth about the U.S. border.

Cabrera was prepared for CNN and quickly flipped their script — and in the end, Baldwin was thanking him for his service to our country.

“There’s so much being thrown at people who don’t know as much about immigration certainly as you do as a border patrol agent, but there a a couple of ways to come into this country if you’re an undocumented immigrant. If you come out on the Rio Grande river, that’s illegal,” Baldwin said after greeting Cabrera.

“Even if you’re a U.S. citizen, that’s illegal,” Cabrera shot back.

Baldwin then asked about delays for asylum seekers under Trump.

“We’ve had this situation going on for four years now. I don’t think you can necessarily blame it on one administration or another,” Cabrera said.

“It started under one and is continuing under another. It hasn’t been fixed and it needs to be fixed. Right now we have this beacon of, ‘We’ll leave the light on for you and let you come illegally into the country,'” Cabrera continued. “If you’ve seen some of the stuff we’ve seen, you’d understand how important it is to have a tough stance to divert people from coming here.”

What Cabrera described made Baldwin gasp in shock.

“When you see a 12-year-old girl with a plan B pill, her parents put her on birth control because they know getting violated is part of the journey, that’s a terrible way to live,” Cabrera said. “When you see a 4-year-old girl traveling alone with just her parents phone number written across her shirt. We had a 9-year-old boy have heat stroke in front of us and die with no family around. That’s because we’re allowing people to take advantage of this system.”

Cabrera said that Congress is the only one that can change the law. Until then, border agents will continue to enforce the laws of the land.

“Most of our agents are parents. I’ve seen guys and I’ve done it myself, you give your last bottle of water to a kid, you’ll take a toy out of your car to give to one of these kids because you know the situation they’re in.” Caberera explained.

He continued, “Agents are very sympathetic. We’re human, we’re fathers, we have families. We do a lot for the communities here, whether or not a camera is involved. Our agents are very involved. And nobody saves more lives along the southwestern border than the U.S. Border patrol.”

Baldwin continued to try and blame Trump, but Cabrera wouldn’t let her off easily. He said that the separation policy had kept rapists out of the country and saved families, and it was the most humane option available

In the end, the CNN host was thanking Cabrera, saying she appreciates him, his voice… and his job.

You can see the powerful exchange below —