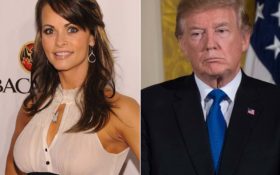 The mainstream media has played right into the hands of Stormy Daniels — the adult film actress accusing President Donald Trump of a sexual relationship — by keeping her name in the news.

Cable news is pushing smut as news — and none are more guilty than CNN. After another woman came forward alleging an affair with Trump, CNN quickly jumped at the opportunity to push her down America’s throat on primetime.

CNN’s Anderson Cooper sat down with former Playboy model Karen McDougal in an interview that aired Thursday night — and they did nothing but talk smut. They didn’t talk politics, or news, or anything of consequence.

It was just sex.

“Well, after we had been intimate, he, he tried to pay me. And I actually didn’t know how to take that,” McDougal claimed, without evidence. “But I looked at him and I said, ‘That’s not me. I’m not that kind of girl.’”

Rather than talk about real news, CNN talked about an allegation of an unproven sexual trist from a decade ago.

McDougal said she continued the relationship with Trump for about 10 months and broke it off in April 2007 because she felt guilty. So why is she coming forward now?

The mainstream media has tried to portray Daniels and McDougal as victims. These women are not victims — they are vultures.

Both women have come forward in the past year to claim they had affairs with Trump… over a decade ago. Why cover these stories now?

Simple: Smut sells, and CNN is more of a pimp than a news station.

During the first two weeks of March, The Washington Post reports that CNN spent over 6 percent of their airtime discussing Daniels. During the span of 5 days, CNN mentioned Daniels’ name a whopping 141 times.

Where was their concern over mentioning the spending bill, or talk of Hillary’s investigation?

According to Newsbusters, on March 7, 149 minutes was used to discuss the Daniels allegations, which she’s changed a number of times.

During CNN’s interview with McDougal Thursday night, the former Playboy model claimed that she ended the affair because she felt guilty over hurting Melania.

Speaking to CNN — which the network made sure to tell everyone was exclusive so they’d tune in — McDougal apologized when she was asked what she would say to Melania Trump.

A woman like McDougal does not care about any one else’s feeling, critics say. Her goal in making these unproven allegations public a decade later was not to apologize to Melania, but to humiliate her.

The White House has said Trump denies having an affair with McDougal on Thursday night.

Earlier this month, The Washington Post reported that Fox News spent less than 1 percent of their airtime on covering the Daniels allegations.

Earlier this month, Suffolk University released a poll that was very concerning for CNN. An important detail in that poll is, “Among those with an unfavorable view of the news media, a plurality — about a third — said they trusted Fox News the most.”

Americans do not watch the news to hear the latest gossip on the president, they want to hear what is happening around the world. CNN has not grasped that detail yet, maybe that’s why their ratings keep declining.

The Associated Press and Kylie Handler, editor, contributed to this article.