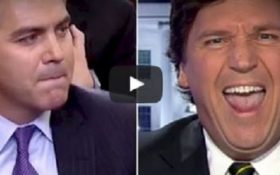 White House senior policy advisor Stephen Miller was just about to wrap up Wednesday’s press briefing when he took one last question.

It was from CNN’s Jim Acosta, the liberal network’s senior White House correspondent, and it led to a verbal smackdown.

Who is Miller? He’s the man that, in February, declared: “Our opponents, the media and the whole world will soon see as we begin to take further actions, that the powers of the president to protect our country are very substantial and will not be questioned.”

When Acosta tried to compare the new immigration policy — which gives priority to legal immigrants who are highly skilled — to a violation of the Statue of Liberty’s plaque, he got a quick history lesson from Miller.

“The poem that you’re referring to was added later, is not actually part of the original Statue of Liberty.” Miller was right, of course — the poem that reads “Give me your tired, your poor, Your huddled masses yearning to breathe free” wasn’t added to Lady Liberty until the 20th century.

Acosta pivoted quickly, and compared the new policy to the Trump border wall construction. In other words, Acosta tried to say illegal immigration was the same as legal immigration.

“Surely, Jim, you don’t actually think that a wall affects green-card policy? You couldn’t possibly believe that, do you?” Miller shot back. “Does CNN really not know the difference between green-card policy and illegal immigration? I mean, you really don’t know that?”

That’s when a visibly distressed Acosta tried a new attack, and implied that giving English-speaking immigrants preference was racist.

“Are we just going to bring in people from Great Britain and Australia!?” Acosta asked.

The question, Miller said, was extremely insulting. Indeed, people all across the world — of every race, color, and creed — are capable of learning and speaking English.

“Jim, have you honestly never met an immigrant from another country who speaks English, outside of Great Britain and Australia?” Miller asked. “Is that your personal experience?”

According to The National Review’s Rich Lowry, Acosta’s attack pulled back the veil on the liberal media’s agenda, and when he lost his cool it revealed how the mainstream press will craft a narrative against Trump.