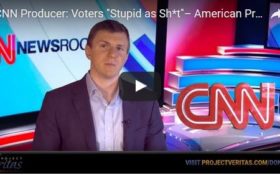 CNN is toast after this video.

This week, a top producer at the cable news network was caught in a hidden camera investigation calling the network’s nonstop coverage of the Trump-Russian collusion story “bullsh*t” that’s pushed on America for the ratings.

Just a day later, CNN anchor Van Jones was shown in a separate tape admitting the investigation is a “nothing burger” the media is feeding straight to the American people.

Now a third undercover tape has emerged — and this one is the most insulting yet.

In the tape, a CNN associate producer is seen calling the American public “stupid as sh*t” and admits that “90%” of his coworkers hate President Donald Trump’s administration. Apparently, CNN employees thinks their viewers are too stupid to see through their lies.

It gets worse. The cable news network has spent the last 24-hours on damage control, culminating in Van Jones’ appearance on CNN’s prime-time show “Anderson Cooper 360” Thursday to claim the tape of him was a hoax.

According to Van Jones, the video, captured by journalists from conservative activist James O’Keefe’s Project Veritas, was “selectively edited” by O’Keefe to show only one side of the story.

Watch the footage that could take down CNN for good here —