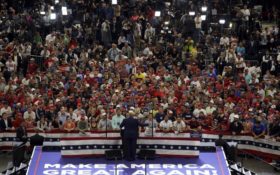 CNN had some technical difficulties on Tuesday night .

It was so difficult for CNN stars to watch President Donald Trump’s 2020 re-election rally in Orlando, the director ordered the cameras to cut away when Trump called them out.

“2016 was not merely another four-year election,” Trump said. “This was a defining moment in American history. Ask them, right there.”

And he pointed squarely at the news crews operating the cameras.

That’s when the crowd cheered a verbal barrage against the far-left network.

You can watch the video of CNN cutting away suddenly here —

That’s not all. CNN’s stars started complaining about Trump’s boasting of his accomplishments, despite the fact that he was at an election rally.

What else are election rallies for?

Back in Orlando, the 20,000 seat arena was teeming with Trump supporters, many of which began camping out days before the arena opened. Over 100,000 people reportedly showed up to see the president. Most watched from outside.

Whoever the Democrats select as their candidate moving forward, they have a crystal clear picture of what they’re going up against in Trump.

The rally proved he started a “movement.”

Heading into the 2020 election, it may prove to be an unstoppable force.

“Together we’re breaking the most sacred rule of Washington politics: We are keeping our promises to the American people,” Trump said.